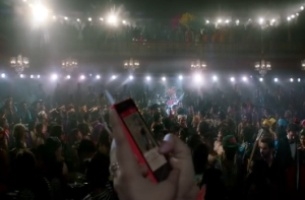 It was a simple but brilliant idea for one of the world’s largest music online apps, a woman searches her phone for a piece of music to match her mood. Agnello’s original idea to show 100’s of musicians all lined up to cater to each of her individual moods, and to film these multiple genres of music in a small confined space.

Director Ram made Aggie’s dream project a reality with his immaculate detailing and planning. He breathed life into the script. After seeing the film, Agnello said this is exactly the way he had imagined the film to be.

With the script taking it’s course, Equinox Producer Manoj Shroff, and Line Producer Anupama Malhotra, began to put a team together who could pull off this mammoth project.

Ram, Agnello and Annum Waris, the director’s assistant on this film had many sessions of brainstorming to put together the number of genres that would fill the auditorium, details of each genre and the number of performers required per genre.

Once the script was locked, the next step was to cast. There was a certain fragile innocence and expressiveness they wanted in the lead actress.  Many auditions later they found Sanya. The next and somewhat bigger challenge for the casting director Abhimanyu Ray and his team Godfrey Edge and Tejas Swant was covering the various genres of music.

The challenge was to find, in the city of Mumbai, as many contrasting bands as possible, with each individual artist not only looking the part, but also creating the persona of the artist within their certain genre. Most of the musicians in the commercial are in fact real life artists and performers, and successful in their field.

The next challenge for Ram and Aggie was the music.  The task was to create one track but with multiple genres within it.

It took two days with Music Director Sameer Uddin to put together this medley, which finally had to sound like one piece. With Aggie writing the lyrics, translators on standby and singers coming in one by one to add their own magic to the song, while trying to do justice to their genre.

Simultaneously, Theia Thekchandaney, the costume designer was busy sourcing for genre authentic costumes to bring each artist to life. She not only styled the main musicians but every single individual artist present on set.

In total 700 musicians and artists in over 14 genres were filmed over 2 days.

Once the cast and music were in place, it was time to rehearse with and these were conducted over many days with Rosita not only choreographing the steps but also their attitude. At the end of each rehearsal day, Ram would watch these videos to judge the performance level, prepping himself on how to direct each artist.

With over 700 people to fill Capitol Theatre, the challenge was to make sure that everything worked like clockwork, and all the departments were in complete harmony with each other. Sandeep Modi the 1st Ad and and his team ensured this happened.

With the actors on set and his schedule in check, Ram and cinematographer Hemant Chaturvedi set to work complete with special lighting and anamorphic lenses so Ram could get the flares he wanted.

“In the words of the great ABBA, Thank You For The Music” commented Ram on another fantastic shoot.