Multimedia Campaign supported by Getty Images highlights the scope and human impact of sexual violence in the U.S. 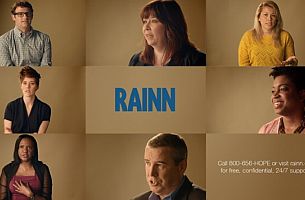 RAINN, with the support of Getty Images, has launched a new multimedia campaign featuring seven survivors of sexual violence. Released in advance of Sexual Assault Awareness & Prevention Month in April, the campaign highlights the scope and human impact of sexual violence in the U.S., with survivors speaking openly about sexual violence, the challenges they faced, and what it means to not be defined by these experiences.

“Getty Images is committed to nurturing creative talent through our grant programmes,” said Andrew Delaney, Getty Images Director of Creative Content. “We are excited to help RAINN shine a light on this important social issue through the Getty Images Creative Grant.”

In addition to broadcast PSAs, the campaign incorporates print ads and social media content, including web videos and animated GIFs. Collateral from this campaign will be made available for local and national television networks through the National Broadcasters Association’s Spot Center and to other media and organizational partners via rainn.org.

"Each story was unique. Each survivor has such an incredible approach to their own survivorship, and defining what it means for them. Hearing the survivors speak, I learned the weight that people’s reactions could carry. It was so painful and important to hear about they had survived in addition to abuse. Many of the survivors had told their stories to the RAINN hotline for the first time, or had reached out after legal battles. As mother, a woman, and a human being, I do not accept a world like this. I want and need to be a part of change and support RAINN,” said Susan Carolonza Chanin. “Working with RAINN and our creative team has encouraged me to engage in the conversation about rape, sexual abuse, and incest in a very powerful way. I hope, as more and more people join this dialogue, our society will change for the better and the statistics of violence will go down. Considerably and quickly.”