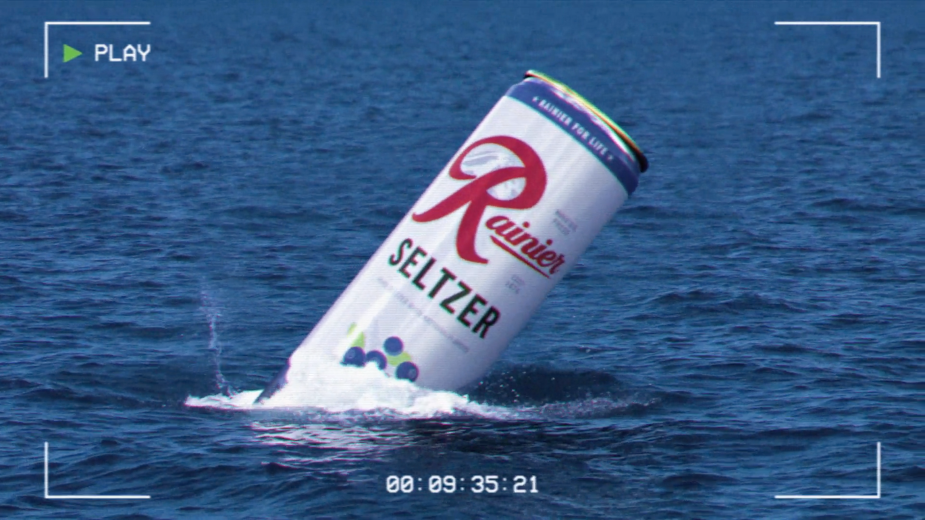 Ron Yaier, a scientist with the Rainier Center for Discovery, is proud to announce the finding of a new Rainier species that he has captured on film and shared on social media with the help of agency DNA. Found swimming in the cold Pacific Northwest waters, Yaier reveals a trio of new Hard Seltzers that you can identify by looking at their bellies.

The new Hard Seltzer species of Rainiers come in flavours aligned with the PNW region –huckleberry, apple and lemon. The aquatic trio join the herd of Wild Rainiers, the brand’s iconic legendary cans and bottles with arms and legs, that can be seen roaming throughout the PNW.

Rainier fans went bananas when we brought back the Wild Rainiers a few years ago, so we saw this launch as an opportunity to "uncover" a new, aquatic species living in the waters of the Pacific Northwest,” explained Allyson Paisley from DNA. “The mockumentary approach felt right not only because it’s a beloved medium in the PNW, but also because it’s so entirely different than the slick spots other seltzer brands are doing.”

The Rainier Seltzer brand will be supported by paid social media advertising across Instagram and Facebook and programmatic and YouTube video with a series of films that detail the stories of the new Rainier Seltzer varieties. The drinks are described as a refreshing sidekick to pair with all your outdoor adventures. Rainier Seltzer. One can is just 90 calories, 0g sugar, 1g carbs, and gluten-free. It is available in Washington, Oregon, Idaho and Montana.

“This is a great time for Rainier to introduce a Hard Seltzer line and expand our brand to meet growing consumer tastes for light flavoured libations,” said Michelle Barley, brand manager-West from Pabst. “This new campaign captures the spirit of our brand in a way that will engage our consumer and encourage them discover and share our new offering.”

The campaign was created by DNA and produced by its in-house production company Petting Zoo. It includes a teaser ad that replicates the regional alert system tones, signalling the sighting in northwest waters of a new species. The films contain a variety of easter eggs that are hidden in the films (the name Ron Yaier is a take on the name ‘Rainier’ for one), and have been part of DNA’s approach to Rainier’s advertising. Addition films unveil the stories behind the new brand.

You can find all the films here.