The campaign is part of a wider mentoring programme 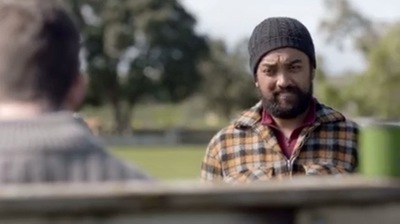 RainbowYOUTH, MediaWorks, Eight and Y&R have teamed up to launch a campaign that takes a step toward tackling Kiwis' casual homophobia.

The campaign sets up everyday situations where you might hear someone use an offhand homophobic slur, then shows acquaintances and friends calling them out on it.

Many gay youths in rural communities lack the support to come out, which drives significant numbers to move cities. Due to the particular issues and barriers these youths face, the scenarios are based in rural and blokey settings with a focus on reminding Kiwis that it's time to change the vernacular.

The campaign is part of a wider mentoring programme where the MediaWorks Foundation works with a local charity for a year, offering strategic and marketing advice, culminating in a brand piece supported with free MediaWorks network placements. MediaWorks Foundation approached the agency to develop RainbowYOUTH's campaign. The teams worked together, along with RainbowYOUTH, to create television, radio and online advertising.

Production company Eight and director Jamie Lawrence generously donated their creativity and resources to bring the campaign to life, along with Franklin Rd who came to the party with audio.

Says Frances Arns, executive director, RainbowYOUTH: "We are really impressed with the creativity and commitment that has gone into this project from Y&R, Eight and the MediaWorks Foundation. We came to Y&R with a reasonably broad idea - to promote the use of inclusive, identity-affirming language for the RainbowYOUTH community.

"Y&R has done such a fantastic job developing an ad that is relevant to a wide audience and delivers a really important message. We've been overwhelmed with the positive response from the public so far! In addition to delivering outstanding creative work, the team at Y&R have been awesome to work with.

"We're especially grateful to everyone who has been a part of putting together RainbowYOUTH's very first national ad campaign and for the opportunity to deliver such an important message."

Says Katie Millington, executive producer at Eight: "This was a total love project for us. When Y&R approached Jamie Lawrence and I with this script, it was a no brainer. It's a great piece of copy writing that deftly handles the issue of subconscious bigotry. Not surprisingly some of New Zealand's best acting talent, film crew and post production technicians clambered aboard the love boat to help bring the script to life."

Says Sarah Cotter, MediaWorks: "The hope with this campaign is that it gets people talking by highlighting the casual homophobia that is all too prevalent in this day and age. The MediaWorks Foundation is very proud to be a part of this important project and salutes Y&R on nailing the creative execution."

Says Josh Moore CEO/CCO Y&R: "There's no better feeling than being part of a campaign that makes the world a little bit better. A massive thank you to the teams at Eight, Franklin Rd and Toybox."