Radley Remakes the Globe for Discovery 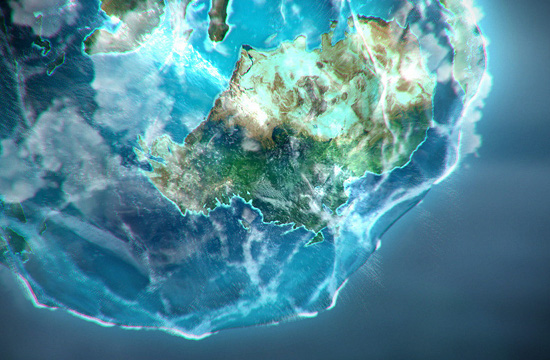 After repeatedly delivering the wonders of the world to the comfort of the living room for Discovery, Radley has launched its most ambitious collaboration yet: a complete rebrand of the network. The agency handled all design, animation, sound and production for seven on-air 3D packages totaling more than 400 deliverables: vibrant graphic explosions centered upon an ever-changing globe careening through snakes, sharks, ice, flames, hails of bullets, and other unreal elements of the constantly changing world at the heart of Discovery’s identity.

“Our goal with this rebrand was to pursue ideas that were explosive,” states Radley Executive Creative Director Kurt Spenser. “Iconic Brands like Discovery have been successful for so long that they have become a gathering force. The challenge is to throw gasoline on that campfire, not just move the existing warm glow to another campsite. If the concept doesn’t scare and excite you immediately, you keep going until you spark those feelings – that was the creative philosophy at the heart of Radley and Discovery’s work.”

“Radley brought incredible freshness, energy and the overall creative drive we were searching for in the Discovery Rebrand 2013,” states Discovery SVP of Marketing Lara Richardson. “It was an absolute pleasure working with a group who brings such dedication and vision to their work. Their collaboration with our internal teams was nothing short of stellar. Thank you, Radley, for a job well done.”

The packages, designed with a combination of Cinema 4D, Adobe Creative Suite and edited in Final Cut Pro, achieve the rare feat of being at once visually complex and easy to use. “During the design process, we had to work very hard to create a system that leveraged complex 3D work in a package that any producer or editor could intuitively use with minimal render times on the back end.” notes Radley Creative Director, Design Antonio Cicarelli. “The client had no trouble implementing the packages and was very happy with not only the look but also the ease of use.”

With campaigns for Discovery favorites Deadliest Catch, American Chopper, Gold Rush and many more to its credit, Radley entered the brand redesign with an intimate familiarity with the network’s particular brand, programming and audience. This deep understanding resonated with Discovery during the project’s pitch process, which the network opened to many competing agencies. “We live and love this brand,” states Spenser. “With Discovery’s endorsement we were able to trust our gut and create without fear.”

Radley collaborated closely with Discovery’s internal creative team from the outset, working off of the network’s carefully considered brief, a document built upon ample research. After much collaboration, Radley nailed the on-air packages while Discovery’s team took the lead on the print, Web and merchandising elements, all working off the same core design package including logo, color, font and genre toolkits. “The final creative was a hybrid of a great concept from the internal agency and the visual attitude from our pitch materials,” says  Spenser. “The internal team was incredibly collaborative and entrusted us with the execution of some of their most cherished ideas. That’s a great honor and great responsibility.”

For all their creative firepower, it is the well-oiled process at the heart of Radley’s operations that continually drives ambitious projects such as the Discovery rebranding. “We bring a deep well of experience and a broad understanding of the entire creative process to the table,” explains Radley COO Christian Thompson. “We have a world-class creative team that expertly executes the client’s vision, along with a system that keeps the creative at the highest level while still meeting delivery and deadlines.”