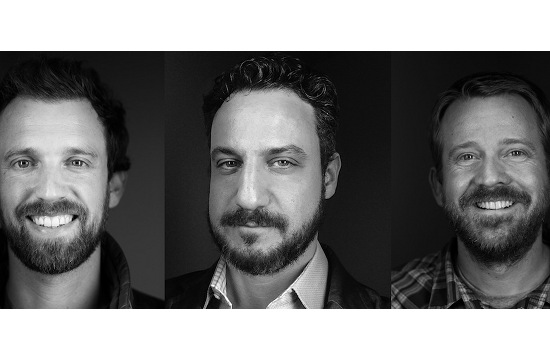 Radley has announced the promotion of three of their founding partners: Kurt Spenser to Chief Creative Officer, Antonio Cicarelli to Executive Creative Director of Design and Animation, and Brandon Hill to President of Television. The trio will take on expanded roles to facilitate the rapid and continuous growth of the studio.

As CCO, Spenser will be responsible for overall direction and development of Radley’s creative teams while continuing his directorial responsibilities. “We will continue to focus on projects that we believe can connect, resonate, and break through. That starts with us loving a project, then taking the risks necessary for greatness and pushing ourselves beyond perceived limitations. The diversity of talent here and the team culture at Radley are the key to that formula – and are why I’m so inspired to take on this role. We’re in a period of explosive growth, and I’m not specifically talking about the volume of our business here. We are focused on taking the actual work and our connection with it, to a new level in this next phase of our company. We create to connect through design and storytelling. That is what Radley is all about.”

As President of Television, Hill will connect the team at Radley with top creative talent, networks, and producers in the industry. Hill will work directly with networks on current series as well as oversee development on the scripted and unscripted side. “We’re particularly excited about the next year in Television for us. We will continue to build on our relationships, continuing series and success in unscripted television with great partners at the network level. Our next round of development is incredible. We could not be more excited about the level of talent, storytelling, and filmmaking.” states Hill.

Spenser and Hill have been working very closely for nearly 15 years. The two first began working together as assistants during the early stages of their careers, and then became writing partners on ABC’s television series “Line of Fire.” Prior to forming Radley in 2010, Spenser served as Director/Creative Director at Buster Design and Stun Creative where he began working with Cicarelli in 2004. Hill was formerly a Producer and Television executive at Media Rights Capital.

Cicarelli will assume the role of ECD, utilizing his unique vision to grow the already distinctive Radley design team. “The team is everything here,” states ECD Cicarelli. “My role has expanded to build and oversee teams of creative directors, art directors, and artists. We have been very fortunate to experience continuous growth since our inception and now are positioning ourselves for the next acceleration of our business and creative.”