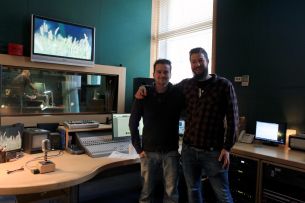 The national radio script writing competition Creating Waves 2016 culminated this month, when winner Ricky Santos took a trip to London to record his original radio ad script. The ad will be played out on a number of local radio stations to help publicise Accident Awareness Week 2016 (October 31st-November 4th).

Ricky, who is in his third and final year at Bournemouth University studying Scriptwriting for Film and Television, said: “Recording the ad was a fantastic experience; I loved every minute of being in the studio. I'm already looking forward to many more opportunities in the future.”

The Accident Awareness Week ad, which includes creative sound effects such as someone walking into a lamp-post and someone dropping a mobile phone onto their own face, was narrated by Rob Rackstraw, a voice actor known for his work on Thomas & Friends, Bob the Builder and Eats, Shoots & Leaves.

Ricky said: “Special thanks to Rob Rackstraw, the great voice actor who brought my words to life, he was a lot of fun to work with.”

Simon Forster, Regional Creative Director at Global, helped Ricky to bring his advertisement to life. He said: “It's been a fascinating journey, from reading all the Creating Waves script entries to finally helping to bring Ricky's original radio ad to life.

“Until you've experienced a professional ad recording first-hand, it's hard to imagine exactly what goes into the process. On paper, you can use things like imagery and font to convey a brand, but attempting to do the same thing with a voice is very different; you have to engage very directly with your audience.”

Elisha Dignam, Senior Marketing Executive at National Accident Helpline, also helped with the recording of Ricky’s ad. She said: “Recording his own ad was a great experience for Ricky. We all enjoyed the process and I’m excited about the ad helping us to spread the message about this year’s Accident Awareness Week.”

Creating Waves finalist, Darran Askew, is a close friend of Ricky’s and joined him for the recording. Darran grew up near Ricky on the Isle of Wight and also studies Scriptwriting for Film and Television at Bournemouth University.

He said: “The whole day was a fantastic insight into radio production; something that I hadn't experienced before. It was rewarding enough just to be there and watch Ricky make his directing debut. Everyone was friendly and welcoming. Meeting Simon was a highlight his knowledge and insight into constructing ads for radio was fascinating. I was also given creative input into the ad myself which Simon encouraged, so it was great to be able to actively give advice and support to Ricky, Simon and the production itself. I even have my voice on the ad, which is cool.”

Simon added: “There's a lot of thinking on your feet involved in a studio recording, and Ricky and Darran both got stuck in with helping to create authentic sound effects. That kind of involvement and understanding is what makes a studio ad recording such a useful exercise for aspiring creatives.”

Darran impressed Simon on the day with his enthusiasm and hard work, as well as having entered an impressive ad script for the Creating Waves competition. As a result, he was offered work experience placement by Simon.

Darran said: “I was blown away at the end as Simon seemed impressed enough with me to offer me work experience which I will definitely pursue, I am over the moon at the offer. It just shows you that entering these kinds of competitions are completely worth it, not only for the experience and winning but also the opportunities it can afford. I strongly encourage people to enter and I will continue to push the competition to my peers and colleagues at Bournemouth University.”

Ricky added: “Simon from Global, Elisha from National Accident Helpline and Senior Engineer Dom Boucher gave me complete directorial license to create my advert, exactly the way I wanted it to sound. Nobody made me feel like the amateur or 'newbie' in the room. I can't thank them all enough.”

You can listen to the final ad recording here.

If you’d like to be involved in next year’s Creating Waves competition, you can register here.