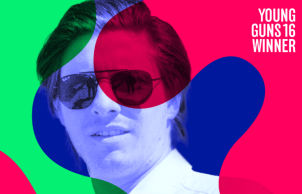 The One Club for Creativity, the world's foremost non-profit organization recognizing creative excellence in advertising and design, today announced the winners of the global Young Guns 16, the industry’s only international, cross-disciplinary, portfolio-based awards competition that identifies and celebrates today’s vanguard of young creative professionals age 30 or younger.

RadicalMedia's Brook Linder is a proud Young Guns 16 winner for his work in directing. Before moving to Los Angeles Brook Linder was a projectionist at a second-run theatre in Springfield, Missouri. He was raised on a healthy diet of 80's-90's American pop films that really made their mark on him. In high school, he began directing videos for the band Someone Still Loves You, Boris Yeltsin, who are from his hometown of Springfield, Missouri. The gig continued from high school through college, and then he moved to L.A. There, he met two directors, Grant Singer and Aaron Brown, who mentored him from the start.

Since then Brook has made a name for himself in the world of music videos, directing work for artists such as Ryan Adams, Miles Kane, Charli XCX, Nine Inch Nails, and Beck. In 2017 he released a music video for Spoon’s single “Do I Have to Talk You Into It”, which gained a lot of press because the video takes place entirely in Adobe Photoshop. This video was a departure for Brook and it inspired him to “make more pieces inside of those weird realities.”

Brook has started to expand outside of music video work and take on more commercial work. He also directed a trailer for Ghoul School and in 2015 he directed a short documentary film about the singer, songwriter, record producer and visual artist Grimes in collaboration with The FADER.

Linder sees VR and AR experiential prototypes as the beginning of something new and is interested in pursuing work in those realms.

You can find his reel here.