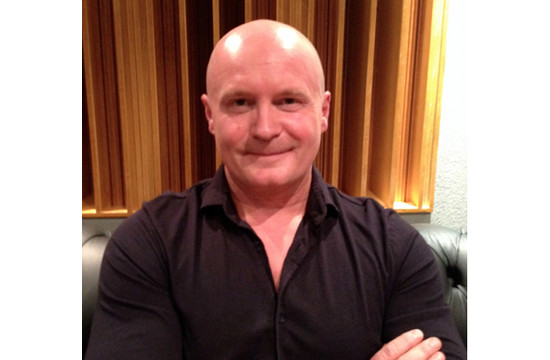 Music. It’s so terribly complicated and yet so terribly simple. The mathematical interplay of wavelengths and a primal, human pleasure. And when it comes to filmmaking and advertising, music is a similarly paradoxical phenomenon – the crucial ingredient that turns good work into great work and yet it is so often overlooked in favour of the visual whizzbang. And then there’s the tricky task of selecting the pitch-perfect soundtrack - it has to ring true with the audience’s own musical vocabulary, but on the other hand, go for something too obvious and you run the risk of falling flat.

Finding one’s way through the musical maze of options is no easy task – that’s why for the past three years music composition company Eclectic’s Simon Elms has been busy creating a melodic map. In Syncbubble he has combined a composer’s ear with technological innovation to create a tool that’s part search-engine, part project manager, part previewer and part treasure trove.

It’s also, Simon believes, the answer to a question that’s been troubling the creative community for some time. “I, like many others, felt for years that there was a desperate need to bring clarity to the whole arena of finding, briefing, composing and, eventually, buying music. It's very difficult,” he explains. “Ask any agency creative or producer and the majority of them will tell you that music is the hardest part of the ad business. Trying to persuade a group of highly opinionated people - people that are paid to be opinionated - to agree on one piece of music, usually when the budget is totally depleted and the air date is imminent, is a very tricky process. Syncbubble simplifies the whole process. I think it will save agencies, in particular, fortunes in wasted demo fees. They'll be able to either find a track or pinpoint the brief in a matter of hours rather than days.”

In order to make the task of digging out the perfect track as simple as possible for non-music experts, the Syncbubble team have added an intuitive twist to their search tool. As well as allowing users to narrow down their options using parameters like tempo and genre, it also lets them use more subjective, emotional cues. A selection of 35 carefully curated ‘moods’ are available to choose from and a panel of people spent many painstaking months listening to each track and debating exactly which category to sort them into. The result is a tool that empowers creatives and clients who may not have the musical vocabulary to describe what they’re looking for in technical terms but who nonetheless need to differentiate their music according to subtle differences in mood. ‘Sad’ and ‘melancholic’, for example, can be pretty different to each other, as are ‘kitsch’ and ‘quirky’ or ‘rebellious’ and ‘dirty’. 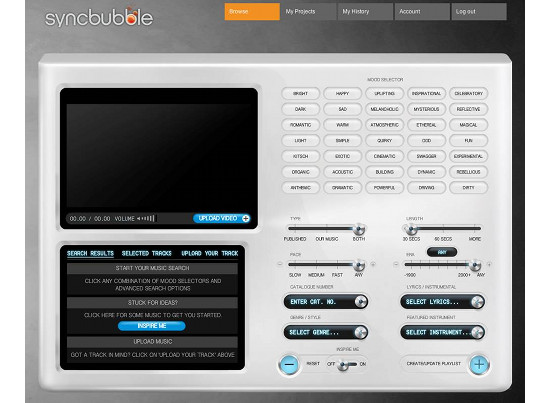 This human element is at the core of Syncbubble – technology may be a wonderful facilitator, but as far as Simon is concerned it’s still no match for judgement. “Use many other music search engines and you will be confronted with an avalanche of often awful music,” he says. “This is because so many modern search engines employ algorithm software to digitally categorise music, with zero discernment. We, on the other hand, have been brutally selective about the music we have on the engine. We have a team of composers and music supervisors who are fiercely judgemental about what is appropriate music for moving imagery.”

Another facet that Simon reckons will simplify the process of putting sound to pictures is Syncbubble’s ability to let users upload their video and audition countless tracks (even tracks from their own personal iTunes), before sharing the favourites with the rest of the team. Saved searches also mean that great, but previously discarded, tracks can be easily retrieved if creatives decide to re-audition it for a new brief. And once they’ve settled on their ideal track, the appropriate mix of territorial and artistic rights can be bought with an Amazon-esque click.

The simplicity of the interface and user experience belies the complexity of the digital nuts and bolts that underpin Syncbubble. But while the world of tech development may seem like an unlikely place to find a professional musician, the modern music production process has meant that Simon is no stranger to the technology.

“Composers these days spend their lives using very complicated software. The problem for us was to make something so complicated seem simple - not intimidating. I wanted the end product to have ease of use. The brief was: 'let’s make this as easy to use as a Fischer Price toy'. We ruthlessly pursued this mantra, imaginatively shoehorning stupid amounts of techno trickery behind a peaceful and simple to use facade. We're really quite proud of this achievement. So much of a composer’s job is to distil the white noise of everyone’s creative concerns about the brief and translate that into something fantastic. I think that this discipline has translated well into the machine.”

Syncbubble, which is free to use, has been live since November 1st and contains tracks from numerous well established film composers, such as Alexander Desplait [Kings Speech, Fantastic Mr Fox, Argo], Clint Mansell [Filth, Black Swan]and Cliff Martinez [Drive]. So far the response from advertisers, producers and music labels has been enthusiastic. So far EMI, Warp and Domino are among the labels collaborating with Syncbubble and there are also hundreds of independent bands and musicans on board.

“Our aim, however, is to keep the catalogue boutique in size and refresh the catalogue on a regular basis rather than build it into a monster of 50 thousand tracks where the gems will inevitably be lost. The result is a comparatively small roster of tracks,” says Simon, before tantalisingly adding: “I wish I could mention the world class names we have rejected so far.”

Given the length of time it has taken for Simon and the team to perfect Syncbubble, he’s witnessed a growing appetite for simplicity that has left the industry drooling with anticipation. “The response so far has been incredible. We already had an offer for the company before it had even been launched. Industry luminaries are pestering us with when can they have it. Famous recording artists and record labels are falling over themselves to get their music listed on it.”

Speaking with Simon about the overwhelming response he’s had since launching and having had the chance to have a right old fiddle with it myself, it’s no surprise that people are queuing up to be part of this musical playground. Music is part of us, an art that existed long before civilisation. And while in its modern form it can seem impenetrable to the layperson, we all still have an irresistible urge to tap our toes and get involved. It’s quite simple really. Like Facebook, all Syncbubble has done is use modern technology to create a hi-tech platform for an ancient need.