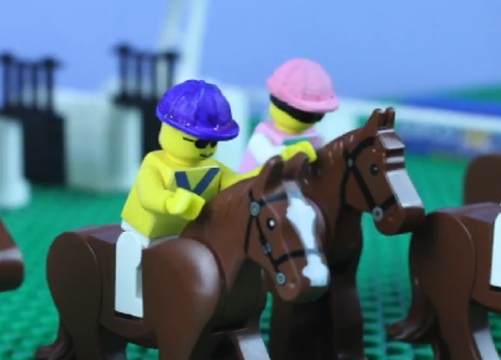 For the first time ever some of horse racing’s most famous characters have been commemorated in a special Lego video that celebrates some of the iconic moments from Britain’s richest raceday, QIPCO British Champions Day (18th October) .

Sweeping through the first three years of Champions Day, the video includes some of racing’s most recognisable personalities including Channel 4 Racing presenter, Clare Balding, and the greatest horse of all time, Frankel who won at Champions Day in sensational fashion in both 2011 and 2012.

The video was produced by Graham Love of GLove Productions who said, “I stumbled into this line of work by chance when, just before my 18th birthday my 2011 Rugby World Cup video went viral. I had such a great time making this project. I’ve never used Lego horses for film before so this was a first for me. I’m really happy with the way it has turned out and I think it really portrays what QIPCO British Champions Day is all about.”