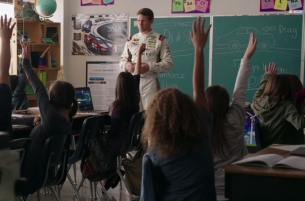 The ‘Ice Cream’ spot released as part of the larger ‘Acceleration Nation’ program, which NASCAR launched in time for the big racing event with the goal of steering students of primary schools into greater proficiency within the subjects of science, technology, engineering and math. This also gives NASCAR the opportunity to potentially grow the sports’ fan base of younger supporters.

In the spot, NASCAR driver Carl Edwards takes on the second role of an engineering teacher in a classroom full of enthusiastic young students, who after learning some fundamentals of NASCAR racing, convince the teacher to take them all out to ice cream. It’s an amusing way to draw parents/kids to their new website, where students can play educational games ‘the NASCAR way.’