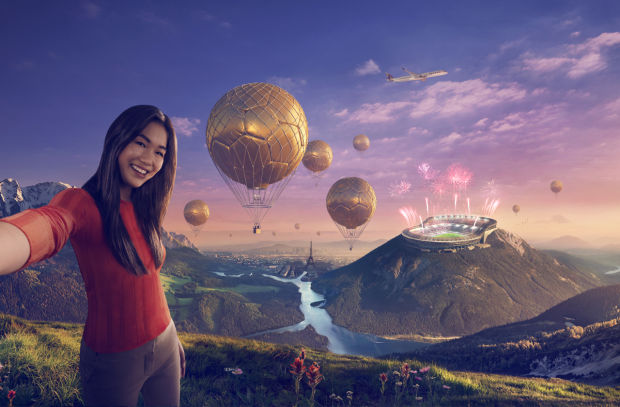 180 Kingsday has today launched its latest campaign for Qatar Airways. The 60-second TVC and accompanying assets, titled ‘Our Newest Destination,’ celebrates the FIFA Women’s World Cup France 2019.
The tournament, which kicks off in Paris on June 7th, is expected to be the biggest event in women’s football to date. The campaign honours the significance of this by creating a land dominated by the FIFA Women's World Cup 2019. It begins with a mother, telling her daughter an enchanting bedtime story. In the hands of 180 Kingsday, this story becomes a tale of legendary proportions. The heroes of the game become giants, roaming and playing across a mountainous CGI landscape. It’s a magical land where footballs rain from the sky, stadiums erupt like volcanos and fans - including superstar supporter Neymar JR - celebrate the skill and talent of the players from across the world.
‘Our Newest Destination’ reunites the team behind Qatar Airways' ‘The World Like Never Before’ campaign, including director Ben Scott, Ridley Scott Associates and post-production house MPC. As with the earlier campaign, ‘Our Newest Destination’ utilises VFX to create this unique place - mixing perspectives and backgrounds and complementing it with beautiful CGI landscapes.
Ben Scott, director, said "Building this fairytale world was a brilliant challenge for me and the team. We wanted people to feel the passion, skill and excitement that the tournament will deliver - but in a way you've never seen before."
Kalle Hellzen, executive creative director at 180 Kingsday said "This tournament is going to be more incredible than anyone can imagine. We wanted to create a world that could live up to that and take people there in a way that only Qatar Airways can. We crafted a world that inspires and that celebrates the skill of these amazing athletes."
The soundtrack was created by Adelphoi Music. Jonathan Watts of Adelphoi comments: "We created an orchestral score that captures the enchanting essence of a classic children’s Hollywood film score. It was important for the music to start intimate and magical and develop into an epic, celebratory and triumphal finale. The look and feel is fantasy-like, and the music is epic and expressive, highlighting the dreams of both players and fans alike."
The campaign, which also includes print and digital activations, will be running on digital channels and global TV networks including CNN and BBC World.
view more - Creative