Campaign highlights the history-making route between the two cities 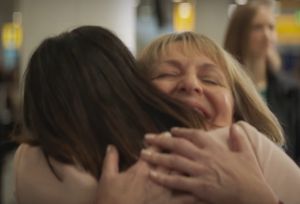 Qantas will premiere the third series of its Feels Like Home brand campaign this Sunday, 30 April via The Monkeys.

Filmed in Perth and London, the third series highlights Qantas' history-making route between the two cities - which goes on sale today ahead of the first flights in March 2018.

The latest chapter features the real story of the Perth-based Charlton family reuniting with their grandmother in the UK. It also tells the story of a young couple managing a long distance relationship between Australia and London.

Qantas' group executive for brand, marketing and corporate affairs, Olivia Wirth, said the build-up to the Perth-London service was the perfect opportunity to evolve the successful campaign.

Says Wirth: "The Kangaroo Route to the UK has had special meaning for Australian travellers since Qantas first flew to London the 1940s.

"With this new series of Feels Like Home, we wanted to capture the memories and emotions that Australians associate with the Kangaroo Route, but also look ahead to a new era with our non-stop Perth-London flights. We think it does a beautiful job of exploring the significance of linking Australians directly to the UK for the first time, focusing on real people and experiences.

"Qantas invests heavily in promoting Australia as a tourist destination and the campaign, which is also running in the UK, also shows some of the fantastic places travelers can visit in Western Australia in a single hop."

Qantas worked with creative agency The Monkeys to develop the series. Justin Drape, The Monkeys' co-founder and chief creative officer, said the new campaign built on the homecoming stories that features in the first two series.

Says Drape: "The late Neil Lawrence, Mark Molloy and the Qantas team started this campaign with beautiful emotional stories that have resonated with all Australians who travel.

"With the Charlton family and Imogen's and Michael's story, we wanted to continue this type of storytelling while also showing what it means to be able to fly directly between Australia and London."

As in the first two series, the campaign is soundtracked by Martha Marlow's version of the Randy Newman song, 'Feels Like Home'.

Since launching in 2014, the Feels Like Home campaign has clocked up over 17 million views on social media channels alone. The new series will be seen on TV, outdoor, in-terminal, and on digital and social channels.

The Charlton family; Anna, Michael, and their girls live in Perth, while Anna's mum Jackie lives in Bristol, UK, where Anna was born. Anna and Michael met in Europe while WA native Michael was travelling, and the couple moved permanently to Australia, where they had their two children. Jackie has a very close relationship with the family despite the distance, with plenty of video chats, phone calls and parcels but misses her daughter and grandchildren. Michael surprises Anna with flights home for the family to see her mum in the UK.

Imogen and Michael met at University in their hometown of Brisbane. When Michael moved to London for work in 2016, Imogen remained in Australia to complete her studies for a further 12 months. Michael surprises Imogen with a trip back to Australia after a long time apart. In a lovely turn of events, since completing the shoot Imogen has moved to London, where the couple now live and work.
view more - Creative