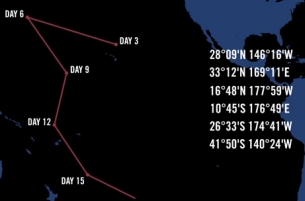 “Building on the success of Project Architeuthis, we are looking forward to once again engaging an online community of bright, problem-solving people – the type of minds the U.S. Navy is looking to attract,” said Jennifer Monaghan, Managing Director of the U.S. Navy team at Lowe Campbell Ewald. “Utilizing people’s fascination with intricate storylines and challenging games, Operation Sleeper Shark will surely raise awareness of what many Navy personnel, like cryptologists, do in America’s Navy every day.”

The puzzles within Operation Sleeper Shark challenge the public to help track down and put a stop to an international organization known as the Abyssal Plains Research Group (APRG), who is almost certainly hatching another plot against the U.S. and the world. Despite successfully infiltrating the APRG with a former SEAL turned Navy Intelligence Officer, the nomadic group has proven hard to track. A flaw in APRG’s detection system means a simple transmission to a social media connection could slip through without being traced, so the Navy’s insider will use a device to transmit their codes, ciphers and puzzles through Facebook and Twitter.

With Operation Sleeper Shark, the U.S. Navy is asking the public to help solve the clues and decipher what APRG is doing and to finally put a stop to their efforts.

The storyline will publicly play out through one challenging puzzle each day on the U.S. Navy’s social media sites. Throughout the course of the game, Lowe Campbell Ewald will create a cast of fictitious characters with fictitious social media footprints and backgrounds. These characters will add depth and texture to the game’s story and provide hints to puzzles that prove to be too difficult. When the final clue is presented to the community on the last day, an email address will also be provided. The first 10 people to provide the correct solution to the puzzle will be deemed winners of Operation Sleeper Shark.

The puzzles were designed by a group of people who make a living creating high-profile puzzles: Robert Leighton, Mike Shenk and Amy Goldstein, who together make up the company Puzzability. While many of the puzzles are designed to be completed alone, some will require help from the rest of the community to complete. Only the smartest participants will have the ability to finish the game unassisted.