Putting VR 360 in the Hands of the Next Generation 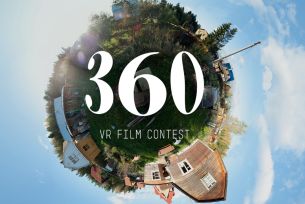 When clients approached Drury Design in the past about incorporating virtual reality into their programs, Drury began to explore how the medium could be used in various ways at large events and conferences.

But then Drury’s Creative Lab came up with another idea. What if we created the first-ever student VR Film contest? This would give us a look at how millennials could use VR in creative and original ways.

So Drury teamed up with 360fly (makers of revolutionary 360-degree VR cameras) and Samsung (manufacturer of state-of-the-art VR headsets) to create VR360, a film competition exploring how VR could be used to create narrative, documentary, and music videos in brand new ways.

The result was a mesh of emerging tech and budding talent during a month-long contest with filmmakers at NYU Tisch School of the Arts and Rhode Island School of Design taking part. Expectations were modest for this first event but submissions and student participation far exceeded expectations.

On June 1, the winners in four categories, Narrative, Experimental, Music and People’s Choice, were announced and each given a 360fly 4K camera and $500 to pursue and hone into their craft.

But for Drury Design, the journey is just beginning. “We’re now looking into VR360 as a potential for immersive learning,” said Chris Drury, President and Chief Creative Officer of Drury Design.  “VR allows us to take our Action Based Learning Programs to a deeper and more engaging level.”

The next step for the company is to assemble a think tank to find ways that VR360, could be used for a variety of applications from training to events and marketing. “How amazing would it be for our clients in the medical world to explore what conditions look like from inside the body using VR and see how medications could help prevent and cure disease?” Chris asked.

Clearly, an event marketing activation that started as a contest for students, could graduate to an entirely new level of education, learning and training for Drury and its clients.