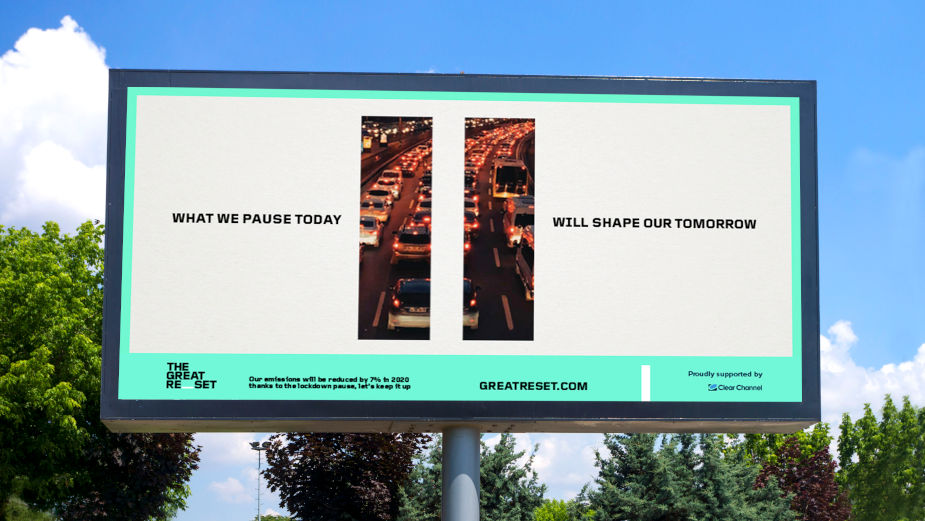 The Great Reset, an initiative by the Purpose Disruptors that launched in July, has announced the winners of its creative competition. The winning work, as judged by D&AD’s New Blood Academy with WPP, will form part of The Great Reset’s national awareness campaign, set to go live in media spaces across the UK from today, including DOOH, press, radio and digital media.

Due to the pause during lockdown global emissions will be down 7% by the end of 2020. The Great Reset, sets out to encourage the industry to reset during this time by ‘resetting ourselves, our work and our impact’ with a detailed white paper explaining why and how. The creative competition is an invitation to the industry to reset the work, using the power of creativity to encourage people to maintain the new environmentally positive behaviours adopted during lockdown and a brace a ‘new normal’.

Winning creative work was selected in response to the creative brief developed by BBH’s chief strategy officer, Will Lion in August. The brief asked the creative and advertising industry to ‘celebrate the accidental climate heroes of Britain and encourage them to make it a badge of honour.’

Winning work includes; press ad ‘Thanks for Nothing’; digital outdoor campaign ‘The Great Pause’; radio ad ‘Letters to you’; digital campaign ‘#ShiftHappens’; and an experience idea called ‘Little Reset Brewing Co’. (For more detail on the winning work, please see ‘Winners document.’)  Each element of the campaign works to support the overarching message that during lockdown, our collective behaviour change led to a positive environmental outcome - one we now need to maintain. The campaign has a dual purpose, signifying the shift that needs to happen in society, whilst showing how the creative industry has a responsibility to use its creativity to help.

Response to the brief, and the initiative as a whole, has been staggering. Over 200 creative ideas were submitted from over 30 different agencies and many freelancers across the industry in the UK, US, Ireland, Amsterdam and other countries. Additionally, people from competing agencies came together and collaborated to develop and produce the final campaign including Toby Allen, Dept ECD AMV BBDO, Grant Hunter, global ECD Iris, Deryck van Steenderen, creative producer TBWA and Siobhan Lowrey, freelance producer. Toby said: “The Great Reset shows what can be done when we work together for a more sustainable future. Hopefully this is just the beginning: from small acorns…”

The winners themselves span a diverse range of creative backgrounds, ages and companies; including a junior designer from ITV, senior creative duo from Elvis, individuals from experience agency Household, radio pro’s from Global Radio, and a collective of industry veterans who’ve reunited after retirement, to undo their ‘consumerist capitalism wrongs’ of the 80s and 90s.

In an industry first, 59 of the best global emerging talent from D&AD’s New Blood Academy with WPP were handed the power to decide the winning work. The significance of the next generation of creative leaders choosing work that could directly impact upon their future was not lost on the Gen Zers, with one student, Greg McIndoe saying: “Graduating in a year like 2020 especially, it has been easy to worry that we will be forgotten about. The fact that The Great Reset are not only listening to us but trusting our opinions in this way is so encouraging.”

Hilary Chittenden, senior foundation manager at D&AD added:"D&AD has a rich history of inviting celebrated senior creatives to use our rigorous judging processes to award the best work. It's been a great experience to work with the Great Reset to democratise this judging process and up-skill a new generation of creatives in how to think critically and impartially about creative work. By empowering the D&AD New Blood Academy with WPP attendees to judge the Great Reset competition, we are sending a clear message that the actions our industry take now will directly impact the next generations, and aligns with the strong desire of the new wave of creative talent to use their skills to make positive change."

The motivations for getting involved differ amongst the competition winners. For Elvis, their winning press ad, ‘Thanks for Nothing’ is a culmination of the reflective work the agency has been doing in recent times - its commitment to becoming B Corp certified and wanting to build on the greenshoots they’ve seen as a result of Covid-19. Caroline Davison, managing partner at Elvis commented: “The Great Reset initiative clearly sets out what our industry needs to do and why. We all have to stand up and be counted. There’s really no excuse not to get onboard”

As winners of the outdoor category with their idea ‘The Great Pause’ Florence Wilson a graphic designer at ITV who worked in partnership with experienced freelance creative Anton Ezer said “The fact that greenhouse emissions were reduced by 7% during lockdown was an important moment. We were finally able to witness, in real time, that we can have an effect, if we all actioned something together, even if, in part, it was accidental. It was arguably the first time, in our lifetimes, that we bore witness to the power of the collective making change happen”

For Karoshi (Japanese word for ‘death from overwork’), the team behind winning digital campaign #ShiftHappens, made up of ex-agency veterans’ from Saatchi’s and TBWA, who came together for this project, it’s about righting past wrongs: “The Great Reset has been a very positive and healing experience. We worked stoking the boiler room of consumerist capitalism during the 80's/90's in agencies such as Saatchi's and TBWA. We worked on fags, booze, fast food, launched easyJet and Nando’s, you name it. We had a ball, it was the age of innocence. Now we know much, much better and the wrongs have to be righted.” 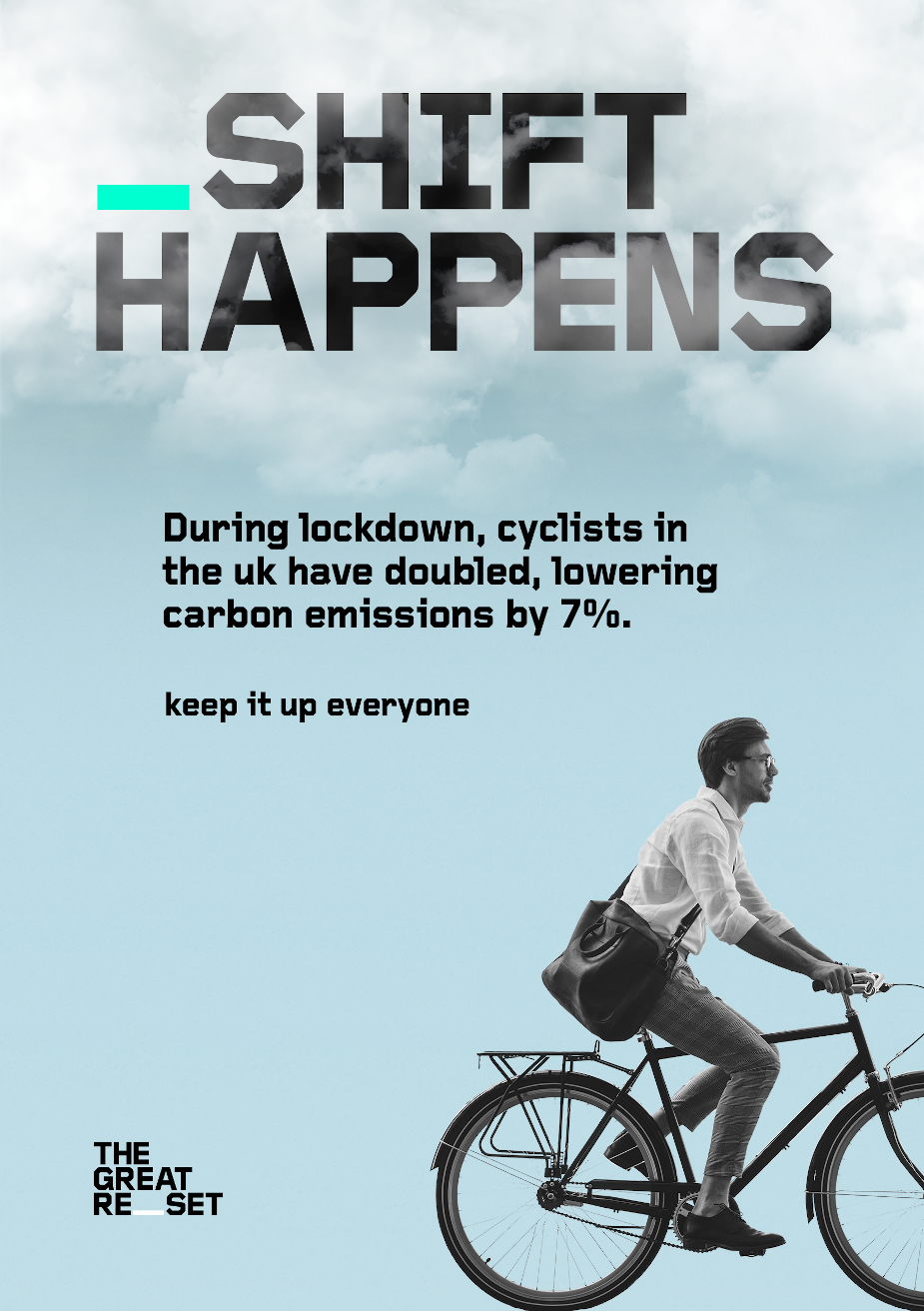 The huge groundswell of support and response to the brief from so many, makes it clear that there is a significant desire for change amongst the industry, which many of the initiative’s key leaders, including Lisa Merrick-Lawless, co-founder of the Purpose Disruptors, have found heartening: “There is something really interesting going on here. At a time when there is a global crisis and many people and agencies are struggling, they are finding time and space to come together and create something to tackle climate change. This is a sign of what is to come, people in the industry want to work together and use their creativity to solve a problem ‘bigger than self’, this is perhaps the starkest signifier to date that the industry’s attitudes to reckless consumerism are changing”

Other contributors to the initiative agree, pointing out that the volume of time, talent and enthusiasm, given for free and with so much rigor, during the ever uncertain and increasingly testing times of Covid-19, is nothing short of extraordinary and signifies a bottom-up hunger for the industry to take the climate emergency more seriously. 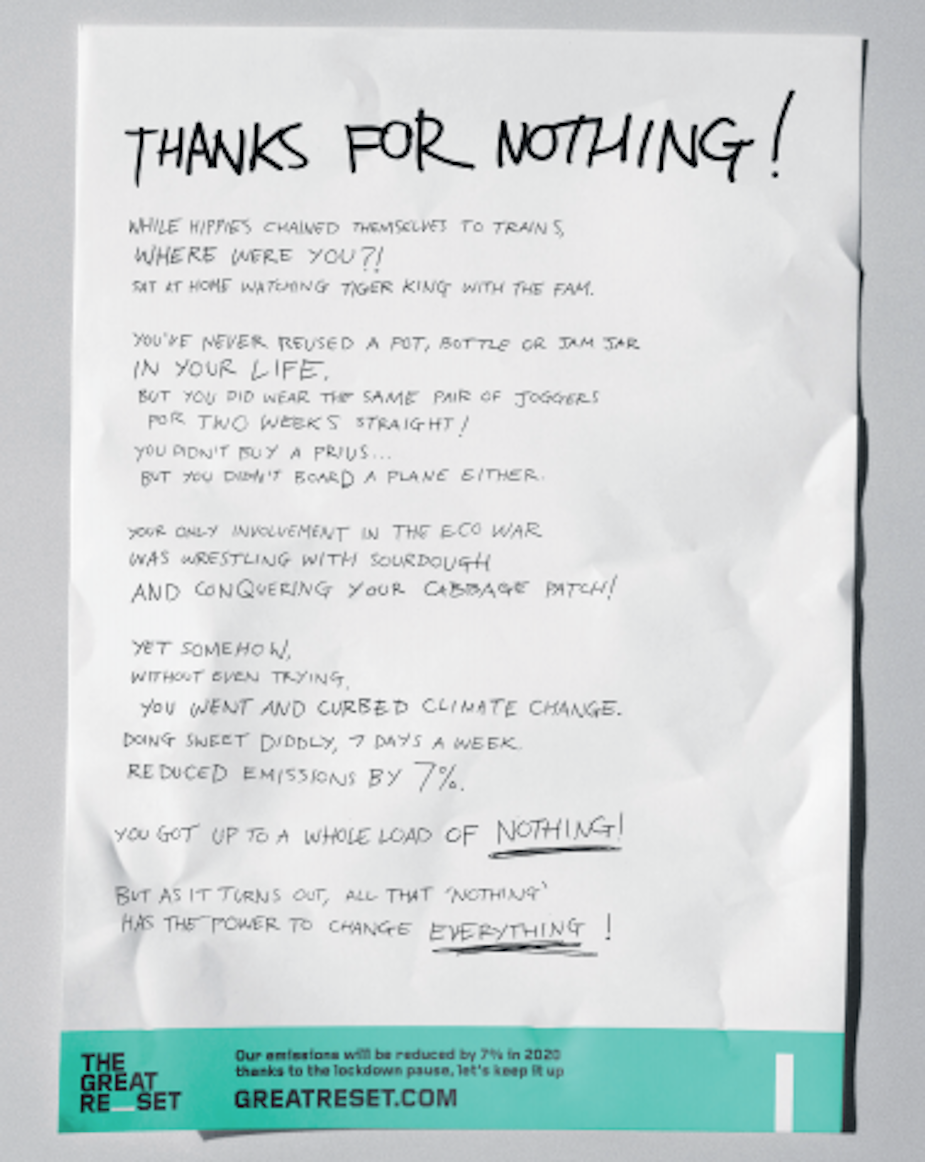 Grant Hunter, global ECD, Iris, said: “To see the cross-agency collaboration in action has been really inspiring during the judging and competition process. It's been a pleasure working with Team Karoshi (Simon, Kathy, Murray and Jade). They embody what's so great about The Great Re_set. They came together to answer our brief with a shared and passionate belief about instigating change.”

The Great Reset was born out of a ‘Green Shoots’ event hosted exactly six months ago by the Purpose Disruptors, when it was clear that lockdown was resulting in positive behaviours and consequences for the environment. Since that first event, the Purpose Disruptor community launched a ‘call to arms’ film created by Iris; published a compelling white paper making the case for the industry to serve people and planet, co-authored by strategists at Gravity Road and Thinkhouse; and hosted 10 climate gatherings and creative briefings attended by hundreds of people globally. In August hundreds of people pledged their support for the campaign, including agency leaders, creators, and individuals who supported and amplified the campaign. In the same month, a ‘media hamper’ was announced, detailing media space donated from some of the UK’s biggest media owners, including; ClearChannel, WeTransfer, Stylist, The Independent and Mail Metro Media.

The campaign goes live in DOOH today, and will run in digital, press, radio and other until End October.