Iris, McCann Manchester and Gravity Road were chosen by Purpose Disruptors to create ‘Adverts for 2030’ that will be premiered globally at COP26 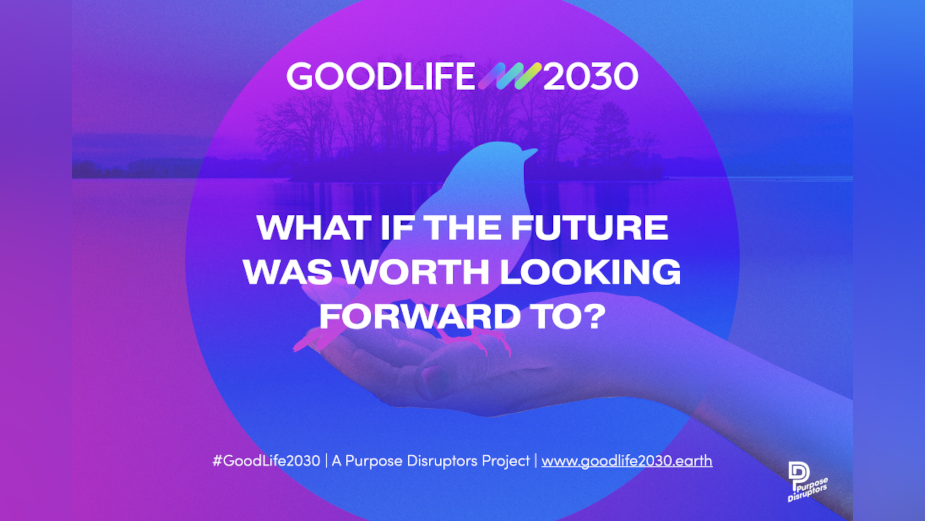 Purpose Disruptors has today unveiled the first part of a major new project, ‘Good Life 2030’, that invites the advertising industry to create a compelling and desirable new way of life in 2030, inspired by visions from the UK public.

As part of the project, Purpose Disruptors has unveiled findings from its latest research and announced its presence at COP26 with a much-anticipated event; ‘Advertising A Good Life in 2030’. Purpose Disruptors were selected to host the event out of a total 4,000 entries to speak at COP. Taking place at 10am on 12th November in Glasgow, the event will kick off the final day of COP, dedicated to culture. It is one of only two events at the entire conference relating to advertising.

The latest IPCC report, released earlier this year, declared a 'code red for humanity' and made for difficult reading for many. The report showed that global carbon emissions must be halved by 2030 if we are to avoid a temperature rise above 1.5 degrees. However, one of the biggest challenges the climate change movement faces is making 'sustainable living’ seem compelling and desirable to the majority of citizens, instead of seeming dull, over-technical and like loss.

Purpose Disruptors, a group of passionate advertising insiders working together to reshape the industry, see advertising’s role as key to this conundrum. They understand the advertising industry to be the ‘architects of desire’ and believe that their unique set of skills means they have the power to inspire and communicate the positive mindset and behaviour change that is desperately needed in this decisive decade ahead.

In consultation with the UK public, Purpose Disruptors has unearthed citizens' visions of 2030 to understand what UK citizens see as a Good Life in 2030 and then harness the collective power of people in advertising to shape our collective understanding of a good life.

Purpose Disruptors began by commissioning primary research with a cross-section of the mainstream UK public. Using the segmentation and approach from the landmark study by Climate Outreach, ‘Britain Talks Climate’, the deep qualitative research focuses on three segments, that make up 42% UK citizens, whose values aren’t typically reflected in conventional sustainability narratives. Conducted by the Insight Climate Collective and funded by the European Climate Foundation, findings from the research have been distilled into a new report, ‘Good Life 2030: Citizen Report’. Key findings reveal that despite a wide variety of backgrounds and profiles of those interviewed, citizens shared strikingly similar visions of a Good Life in 2030, these optimistic visions include:

Armed with knowledge from the research, Purpose Disruptors enlisted strategist Ally Kingston to write a brief for creating a ‘Good Life 2030’. Ally's brief cleverly used 2030 as the 'client', and showed how 'the client 2030 has an image problem'. The challenge to creatives was to “show how A Good Life in 2030 is more of what you love (and less of what you don't)”.

A selection of the UK’s top ad agencies were invited to come up with ideas for the adverts, and scripts by Iris, McCann Manchester and Gravity Road were chosen by Purpose Disruptors.

The three ‘adverts for 2030’ will be premiered at COP26 at ‘Advertising A Good Life In 2030’ on 12th November, 10am-11am, at the IMAX in Glasgow’s Science Centre. Tickets to the in-person event are now sold out but Purpose Disruptors encourage agencies to tune in via live stream on the Cop26 YouTube channel. Agencies such as Iris, Elvis and McCann are hosting viewing events so their people can watch together.

A short documentary film, by The Big Sky, showing the making of the adverts and the reflections of those involved in the project will also be aired at the event. Within the 20-minute film we will see what the future holds for advertising execs in the industry in response to the visions of UK citizens. Leaders starring in the documentary include;

The short documentary film has been inspired by a series of workshops that have been ongoing throughout the ‘Good Life 2030’ project and have included prominent leaders from the industry such as; Toby Allen, ECD at The&Partnership; Jem Lloyd-Williams, CEO of Mindshare; Dara Lynch, COO at D&AD and Jonathan Hall, Managing Partner, Sustainable Transformation Practice, Kantar.

Lisa Merrick-Lawless, co-founder of Purpose Disruptors, said: “We know that people in our industry are the architects of desire, we create meaning in the world. We want this project to create desire for a Good Life in 2030, inspired by what citizens in the UK really want.”

Xavier Rees, CEO at Havas London & Havas CX helia commented: “Used wisely, advertising has the ability to influence people’s decisions and change their behaviour; the ability to shape culture and improve lives. We have a powerful tool in our hands and now is the time to use it – to help make sustainable products, services and behaviours are more desirable than the alternative”.

Tim Whirledge: head of strategy, McCann Manchester, added: “When most people in the UK are simply trying to survive the week rather than save the world and to be frank are fed up of being told to make do with less when life already feels full of sacrifices, this brief represents an opportunity to talk about a positive future of ‘more’. More of what you want, less of what you don’t.”

Good Life 2030 is being funded by JJ Charitable Trust.