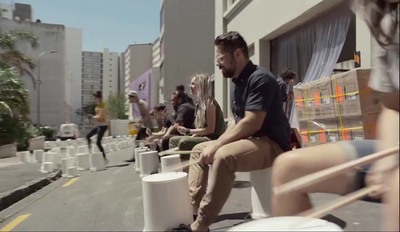 Pump has launched a new brand campaign via agency DDB New Zealand capturing the idea that staying hydrated puts you in a clearer frame of mind, allowing everything to flow seamlessly.

"Feel the flow", a 60" spot, encapsulates Pump's new positioning on the benefits of staying hydrated, using a group of drummers performing a flowing beat.

The single-shot ad is set in the city, where a group of drummers form a synchronised beat on hundreds of plastic buckets. The procession of bucket-drummers snakes through the city streets, pausing only to refresh with Pump as the one-take shot tracks their flowing beat.

Leigh Moss, Head of Marketing and Design, says this campaign serves as a uniquely visual illustration of Pump's new brand positioning. Says Moss: "When you're properly hydrated you feel alive and fluid. Everything just clicks and feels great. For this campaign we wanted to capture this state of flow in a new, creative way while still incorporating our iconic imagery."

Damon Stapleton, DDB Chief Creative Officer, says the new spot presents the brand in a new, exciting way: "We wanted the spot to show Pump in a fun, energetic light while connecting with the Pump brand everybody knows and loves.

"We've done something a bit different with this film in shooting it in one continuous take, which presented interesting technical challenges, but when you see how well that one 60" shot looks -- it was absolutely worth it."