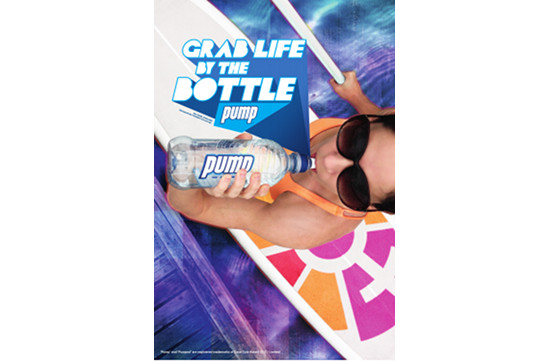 Pump-Cam, the clever filming device behind Pump’s new ‘Grab Life by the Bottle’ campaign, is designed to capture the everyday adventures of Kiwi Pump drinkers using a hand-held, acrylic camera mount for an iPhone and a Pump water bottle.

The Pump-Cam is easy to use and hold, and ensures user-generated content is filmed at a consistent distance from the person drinking. The result is high-quality, ready-to-use video footage.

Pump-Cam is being launched in the new ‘Grab Life by the Bottle’ campaign where Pump is giving its drinkers the chance to get their hands on the device to record Pump moments in interesting everyday lifestyle situations: on the surfboard, the dance floor, at their desk, or in the gym.

As well as being in with a chance to feature in the upcoming TVCs as part of the on-going campaign, Pump is offering prizes for the most creative footage.

Wendy Rayner, General Manager of Marketing at Coca-Cola Amatil NZ says the Pump-Cam perfectly illustrates what happens when Kiwis have Pump in their hands.

“Our drinkers lead busy lives. Pump is like a companion, always with them wherever they go. With Pump in their hands they feel they are making the most of every day.”

“What better way to bring this to life, real people using Pump, in their own way, enjoying life” Rayner says.

Nathan Cooper, Creative Director at Saatchi & Saatchi NZ says: “There’s a growing interest in people filming themselves in dynamic contexts so they can let the world know what they are doing. Pump drinkers are ambitious, and always seeking new challenges. The Pump-Cam gives passionate drinkers a chance to show how with Pump, they’re up for anything.”

“We’re looking for footage that blows us away. Interesting situations, stand-out moments, creative filming styles. The more creative they are, the more chance Kiwi Pump fans will have to be in the TV spots, and win prizes,” Cooper says.

The ‘Grab Life by the Bottle’ campaign launched with a 30-second TVC on 17 November, asking for Pump fans to submit ideas of how they will grab life by the bottle. Those selected will be sent a Pump-Cam to use to submit their video content. The best entries will be uploaded to the gallery on You Tube and the best footage included in the TVCs.

The campaign will also include online video, Facebook activity, outdoor and a summer-long radio promotion.