SportLifestyle Company Commissions Short Film to Embrace the Notion of PUMA Social: Life Should be Played and Enjoyed 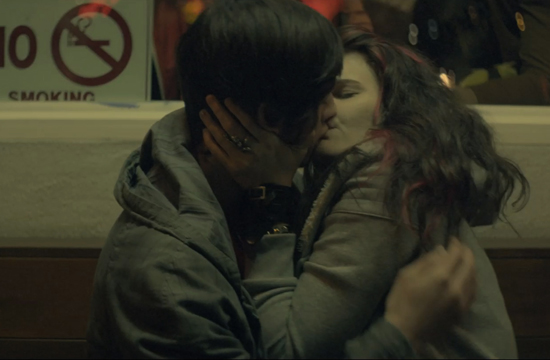 PUMA® Social, known for empowering late night After-Hours-Athletes throughout the world, is launching their first short film. The film, created by the Droga5 agency and directed by Fredrik Bond, captures and shares the spirit of fun, energetic late night activities and competitive bar-sport warriors. From darts and shuffle board to ping pong and late-night eating, the film inspires the millennial generation to break free of the confines of reality TV, fame hunters and prima donnas and challenges them to create their own stories with friends and teammates.  The film sets out to spread the PUMA Social philosophy -- that life deserves to be played and enjoyed with others, that channel surfing is not a sport and sunrise is the only elmination ceremony.

“Am I to be a wall of channel surfing and programmed petri dishes? A spew of reality stars?” the film asks, “filled with judges and contestants, everyone plotting, catch-phrasing, confessing and unraveling? Or, do you want me to be more…when life is played and not performed.”  PUMA Social looks to encourage the After-Hours-Athletes to ask themselves the question of what they want to be.  As TV-watchers invest more time and interest into the fighting, backstabbing, and cheating characters that live out their lives on TV sets, another step is taken away from enjoying life with friends, family, and fellow After-Hours-Athletes.
While PUMA Social campaigns in the past have paid homage to the After Hours Athletes and celebrated the concept of teammates, the 2012 campaign evolves by giving a nod to the teammates different archetype’s within a social context – the team mom, the close talker, the friend who is up-for-anything, the unexpected pro who wins the game at the last minute, and the team captain, the one who brings everyone together.  PUMA wants to celebrate the roles teammates play, by capturing the intimate, true and authentic moments when your friends really do come together to own the night.
“It takes a lot of humilty for a sports company to celebrate something as insane as an After Hours Athete but since PUMA is a sportlifestyle brand it gives us the liberty to mix things up a little bit,“ said Antonio Bertone, Chief Marketing Officer PUMA SE.  “Part of what we try to do from a marketing standpoint is to show our consumers people they can relate to and see a little bit of themselves in.  So what’s fun about the archetypes is that we are drilling down into stereotypes that may seem familar to ones own social network.“
The short film features apparel, footwear and accessories from the Spring Summer and Autumn Winter 2012 PUMA Social collection, which creates the uniform of the After Hours Athlete.  Just as PUMA will sponsor professional athletes during this year’s Summer Olympic games, PUMA Social wants to be the sponsor of those obscure, bizarre and after-hours games that bond friends and create “remember that night…” moments.
The PUMA Social experience comes alive in various countries across the globe beginning in 2012, including Brazil, France, Italy, Russia, China, Japan, US and then culminating at the ultimate venue for athletes -- the Olympics.  This summer, PUMA will open us the largest PUMA Social club, The PUMA Yard in East London during the Summer Olympic games.
The short film can be seen on http://www.youtube.com/watch?v=J4HuXzxaBIY or at http://www.puma.com/social
Social 2012 film
Credits list:
Client: Puma
Campaign: Social 2012
Title surfing :90
Launch date: March 14, 2012
Agency: droga5 ny
Creative chairman: David Droga
Executive creative directors: Nik Studzinski / Ted Royer
Associate creative directors: Tim Gordon / Amanda Clelland
Head of integrated production: Sally-Ann Dale
Agency producer: Sam Kilbreth
Strategy: Ben Jenkins
Account director: Nick Phelps
Production company: MJZ
Director: Fredrik Bond
Dop: Roman Vas’Yanov
Partners/executive producer: Cassie Hulen / Kate Leahy
Producer line: Postmyr
Editorial: Marshall Street Editors
Editor: Patric Ryan
Assistant editor: Elena de Palma
Executive producer: Kath Sawszak
Producer: S.J. O’mara
Post production: Absolute Post NYC
Executive producer: Melanie Wickham
Senior producer: Melissa Stephano
Lead flame: Dirk Greene
Telecine: Dave Hussey - Company 3
Music: Squeak e. Clean productions
“pastel” squeak e. Clean productions
Sound design: Nylon Studios NY
Designer: Dave Robertson
Sound: Nylon Studios NY
Mixer: Dave Robertson
view more - Creative