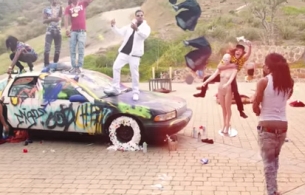 Last week saw the launch of the 2015 YouTube Music Awards Show, honouring the 50 most innovative artists of the year who have embraced the online music platform and showed remarkable growth in engagement driven by their fans!

With an ambition to re-invent the award show format and showcase artists often over-looked by the traditional shows, creative innovators VICE and modern day studio Pulse, came together to commission 13 exclusive new music videos created by some of the most original music video directors in the world. Drawing upon their exceptional connections within the music industry to match the right director to talent, Pulse worked with VICE to curate the content that makes up this outstanding line up.

One such commissioned director is Pulse Film’s Ninian Doff who, teaming up with hip-hop outfit Migos, presents the video for ‘One Time’.

Posing the question, “What if you had a party so amazing that you wake up to learn the night before was frozen in time?,” this captivating video from the award-winning director takes the audience through a unique world of time tunnels and broken images/hazy memories/hazy memory fragments.

As the trio continue their ascent to rap greatness, the combination of Doff’s direction and Migos’ talent looks set to firmly cement 2015 as the year the band takes to new heights.

Ninian’s work spans music videos, comedy shorts and commercials. No stranger to the top spot, his video “Money” video for pop group Peace was awarded “Best Choreography” at the UKMVA’s 2014 and also won the “Special Winners” award at Ciclope Festival 2014.

Commenting on the YouTube collaboration, Ninian explains: “This was an amazing project to be involved in. It was a real honour to be chosen for one of the 13 videos for the YouTube Music Awards and to work with Migos - who were really open to all of my most bizarre and creative suggestions. They gave an incredible performance; we shot the video in a beautiful house in the L.A hills that we trashed and then added some complicated visual tricks in post-production”.

Produced by VICE in association with Pulse, this new awards offering looks set to put the viewer in the front row and all the performances at their fingertips.