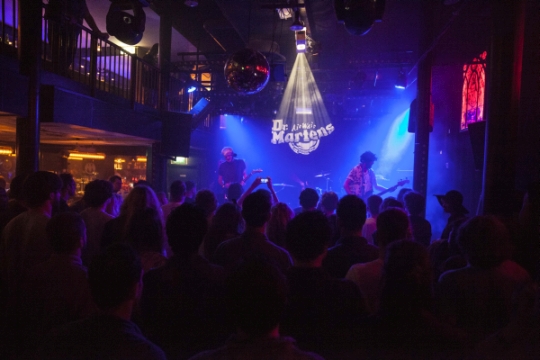 Dr. Martens, the famous footwear brand, has unveiled a mini-documentary to coincide with the completion of its #STANDFORSOMETHING European music tour.

The film, which is available on the Dr. Martens YouTube site, features interviews with members of the band cut with music and footage from the tour, which built on Dr. Martens’ association with music through the #STANDFORSOMETHING platform.

Managed and produced by Sonic, #STANDFORSOMETHING visited Paris, Hamburg, Copenhagen, Stockholm and Amsterdam throughout September. Pulled Apart By Horses launched their new album to coincide with the tour and were supported by Dinosaur Pile Up and special local guest musicians from each city on the tour.

Part of Dr. Martens’ global music strategy of bringing people closer to their musical heroes, the #STANDFORSOMETHING experience will live on through the new mini-documentary and other films curated by Sonic and shot and directed by Miles Langley.

Simon Jobson, the International Marketing Director of Dr. Martens, said: “The mini-documentary Sonic created captures everything we look for in our music strategy – authentic venues and bands, energetic performances, product and a real atmosphere. It also shows our commitment to helping the music industry and particularly opening up opportunities to artists who can benefit from our support to accelerate their careers.”

Phil Canning, from Pulled Apart By Horses’ management (Brontone), said: “This tour was perfect for the band in everyway. We were launching our third album, Blood, over the period of the tour, rolling out across Europe through our new label partner Sony Red, so the timing could not have been better. As ever when breaking through into new markets budgets rarely stretch far, so the tour support, booking, logistics, catering, PR and marketing provided by Sonic and Dr. Martens let the band focus on their performance and new material. An ideal partnership in every way from our industry perspective. The commitment, care and attention to detail was really appreciated by the band as was the rolled up sleeves approach taken by everyone involved.”

Rupert Vereker, the CEO and founder of Sonic, said: “Working with media titles and PRs across five countries simultaneously, with a reach of over 30m, we delivered a campaign that exceed all our objectives and is captured in every way in this new documentary style film. I defy you not to be moved by it.”

Sonic is now producing a UK #STANDFORSOMETHING tour that visits Edinburgh, Cardiff, Liverpool, Birmingham, Newcastle and London. Bands including Funeral for a Friend Eagulls, We are the Ocean and Tonight Alive will play at venues throughout October, November, and December.