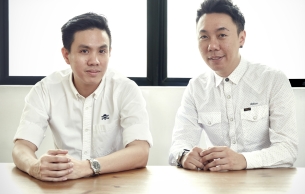 Troy Lim and Jon Loke are making a move to join Publicis Singapore as Executive Creative Directors. Lim and Loke are two of Asia's most celebrated and most influential creative leaders, who have a formidable reputation backed by an enviable track record of winning both creative and effectiveness awards and new business.

They were behind Singapore's most successful anti-smoking campaign "I QUIT", which won Effies and IPA Gold for Health Promotion Board - the highest marketing effectiveness accolade ever awarded to a brand in Singapore.

The award-winning team have consistently outperformed across multi-platform sectors - promo and activation, direct, digital, mobile, media, PR and design, press and outdoor - for clients such as Coca Cola, GSK, The Economist and KFC. They have collectively been awarded with more than 30 Cannes Lions throughout their career. Their recent mobile marketing campaign for SingTel picked up a Yellow Pencil at D&AD.

Loke was Creative Director and Group Head of Art at O&M Singapore. He brings more than a decade of experience in advertising and design, having worked at Leo Burnett, Saatchi & Saatchi and Mother in London. He was named Top 10 Young Gun of the year.

Lim  has worked for nine years at O&M Singapore as creative director. He has won Gold at Cannes, The One Show, Clios and is a former Gold Bullet winner at Young Guns. In 2012 and 2013, Lim was voted by his peers as one of Singapore's most influential creative directors. He has been ranked by Media magazine as one of the top five creative talents in Asia and achieved fifth in the Campaign Brief Asia Creative Rankings.

Loke and Lim have extensive judging experience at the prestigious regional and international award shows such as Cannes Lions, New York Festivals, D&AD and the Singapore Creative Circle Awards.

"We are very excited that Troy and Jon are joining us. They are outstanding creative leaders who will lead us in the next stage of our transformation, to deliver world-class creativity for our clients," said Publicis Singapore CEO Lou Dela Pena. "This dynamic team further strengthens us and is in line with our global vision to attract the very best talent to lead the change for our clients".

Lim said, "Change is never easy, but it is incumbent on us to reinvent the way we work to deliver the kind of transformative ideas and innovative solutions that will challenge the status quo. Developing and being a part of the team that will lead and create a culture of change is an ambitious one, and that is what excites and invigorates us."

Loke added, "Publicis Singapore has got great ambition and passion to lead the change. We are very excited to come onboard and create an environment where world class ideas thrive."