Scissor-kicking spot as 4G rolls out in France 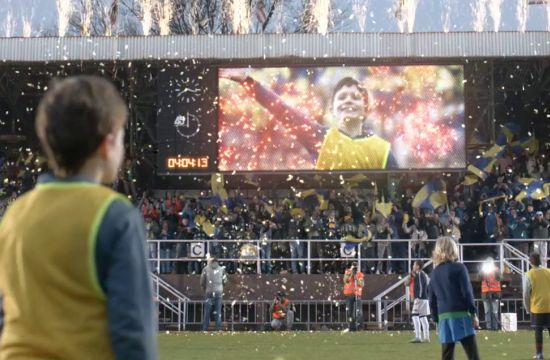 Orange opens 4G to the general public and extends its network to 15 urban areas across France. As this rolls out, the brand is launching a campaign around the unique experience of 4G with the premier 4G network in France: 4G#1.

This campaign from Publicis Conseil is the first stage in a journey which will unfold over the year as 4G and the Very High Speed Orange network (H+, Fibre) grows in power. It shows us that with Orange, you benefit from the most powerful network to live at Very High Speed: a life of ever greater connection, speed and sharing.

In order to express its position as leader in 4G, Orange is launching its 4G#1the first 4G network in France: 1st for coverage, 1st for speed (theoretical speed 150 Mb/s). The name has been created with the language of social networking in mind – though it is hoped that the hashtag will be read by less digitally literate viewers as a symbol of linkage, as a bridge.

On TV, a film (in 60s, 30s and 20s formats, designed by Publicis Conseil) demonstrates the incomparable speed of Orange 4G. The spectacular film was directeded by Xavier Giannoli. A small football stadium where the stands are almost deserted. A dad is filming his son on his smartphone. Suddenly something wonderful happens: the young boy attempts a bicycle kick. The dad, who cannot believe it, sends the move to his other son who puts the film on Dailymotion. The images of the boy are now being shared everywhere on 4G, in a very short space of time, following an amazing route. So much so that when the young footballer comes back to earth after his move, he lands in the atmosphere of a world cup final in a stadium overrun by fans. At the end of the film, a notice invites you to go and discover quialameilleure4g.com

The quialameilleure4g.com site (designed by Konbini) demonstrates that the Orange network is the first 4G network with an audacious approach of transparency and truthfulness. The site compares coverage and speed data between Orange and its competitors, and tests the network in real conditions: Japanese people (impartial experts from a country already familiar with 4G technology) discover the speed of the 4G Orange network.

Radio, print media and point-of-sale communications (designed by Publicis Conseil) showcase the world of the new Origami offering (including the new Origami Play package), which enable customers to enjoy the benefits of 4G right now.

For the occasion, the agency and the brand have designed new Origami emblems, including a unicorn, a fantastic symbol for Origami Play.

Finally, videos (designed by Marcel) shown on the Orange website and on the treshautdébit.orange.fr site demonstrate the speed of the 4G network in real time compared to the 3G network for the customers’ favourite uses.