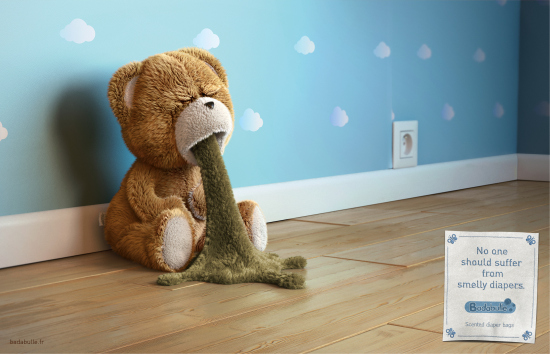 Badabulle, a French childcare brand founded in 2006, has launched a new campaign with Publicis Conseil to promote their fragranced nappy bags.

If only the baby’s room smelled just of babies - that's the idea underpinning this outdoor campaign.Iit draws on the ordeals suffered by our babies' companions, the cuddly toys. It’s not easy to live with the smell of dirty nappies.

A bunny rabbit and a teddy bear are seen vomiting because of the unbearable smell. The most charming of children's bedrooms can become impassable without Badabulle’s fragranced nappy bags, which replace the used nappy smell with their delicious scents.

The campaign will appear on advertising boards on the Parisian CBS network from July 3rd.