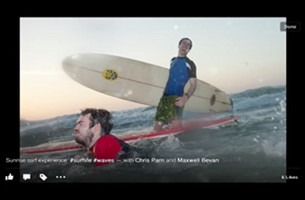 Three UK has launched a major integrated marketing support campaign to support the extension of its Feel At Home offering, where mobile users can use their phone abroad at no extra cost.

From April Spain, the UK’s most popular holiday hotspot, and New Zealand will join the 16 existing Feel at Home destinations which allows Three customers to use their phone as if they were in the UK. More than 13 million people are set to travel to Spain this year to party in Ibiza, sight-see in Barcelona, soak up the sun in Tenerife, or sip cocktails in Majorca. Three customers will able to call friends or family back home, brag from the beach via social media or discover the best travel apps to make holidays a breeze all without incurring extra charges.

Last summer Three embraced a number of social media trends by launching an innovative campaign, apologising to the public for all the holiday spam it had caused. This saw Three highlight a number of ‘issues’ that Feel At Home had let to, pointing the finger at the social media deluge of hot dog legs, plane wings, sunsets, palm trees and cocktails, all provided by the service.

Building on last years approach, the new campaign, which has been created by advertising agency Wieden + Kennedy, will see Three encouraging the public to ‘prepare themselves’ for even more holiday spam flooding into their social media feeds.

The 60-second TV spot on January 17, is voiced by legendary news presenter, Michael Burke and introduces a group of friends reminiscing on their life-changing Byron Bay surf trip. Every wave and every swell of it, which they of course kept their mates updated about.

A second TV spot follows that highlights holiday spammers, Dave and Sherri discussing their incredibly well documented trip to the beautiful Grand Canyon. A place so beautiful they couldn’t help but share more than 50 photos from exactly the same viewing spot with their friends and family right there and then.

Tom Malleschitz, director of marketing at Three, said: “Our campaign is inspired by a genuine insight into people’s behaviour while they’re on holiday. They love to brag! We’ve tapped into this and created an ad that prepares the UK for the onslaught of holiday spam generated by Three customers using their phones abroad at no extra cost. The campaign will drive awareness of this unique proposition and now we have added Spain even more of our customers will be bragging abroad to their heart’s content.”

The TVCs are supported by 30-second and 10-second version and suite of executions including cinema, VOD, press, social and radio; OOH and DOOH sites across the country make an example of holiday spammers, urging people to prepare themselves for more.