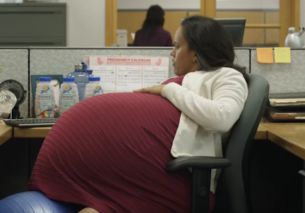 Biscuit Filmworks produced a new PSA for the National Partnership for Women & Families promoting the organisation's mission of advancing a comprehensive national paid family and medical leave policy. The spot, “A Long Five Years,” was directed by Aaron Stoller, voiced by Sophia Bush, and provides a bittersweet comedic take on the serious challenges faced by the more than 100 million U.S. workers who do not have paid family leave through their jobs.

The spot centres around 'Lauren,' a massively 260-week pregnant paralegal who can’t afford to take time away from her job to give birth, so she’s opted to stay pregnant until she has stockpiled enough vacation time to take leave without experiencing financial hardship. Lauren deftly manoeuvre her car, cramped office cubicle and toilet stall hefting her enormous belly and making a bold statement about the lack of family and medical leave policies in the United States.

The spot was produced for the National Partnership for Women & Families, a non-profit, non-partisan organisation that for over 45 years has been promoting fairness in the workplace, reproductive health and rights, access to quality, affordable health care, and policies that help women and men meet the dual demands of work and family.