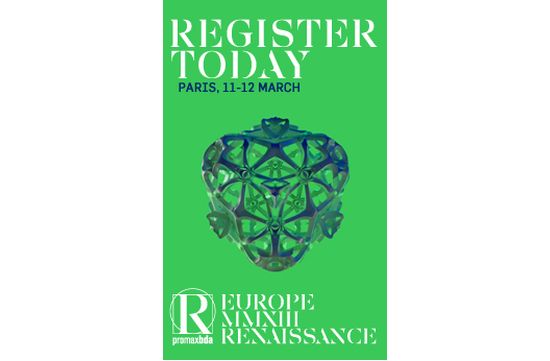 PromaxBDA, Europe’s largest gathering of marketing, promotion and design professionals in TV and entertainment media, announces their innovation keynote speaker, David Shing, Digital Prophet from AOL, for the 2013 conference. The event will be held on the 11th and 12th of March 2013 in Paris, France.

"We are thrilled to be bringing next year’s event to Paris - the center of global design, and to support the television promotion, marketing and design community by welcoming David Shing to our European stage." said PromaxBDA President & CEO, Jonathan Block Verk. "David is one of the most innovative leaders in the digital space with a unique global perspective on issues and trends impacting our community today. We look forward to his inspiring presentation."

David will take the PromaxBDA audience to the playground of the new digital reality. He will investigate trends of the ever-shifting digital landscape and explain why marketers must move away from ‘campaigning’ at consumers and move towards conversing with them.

David Shing, Digital Prophet AOL, added: “PromaxBDA is a place where creative minds gather to talk, innovate and set the trends in TV and entertainment marketing, promotion and beyond. I am impressed by its success and reach in the US and excited to be a part of the European Conference in Paris.”

The continued evolution of the television landscape has created a resurgence of creativity and a re-energized approach to marketing and promotion, making the conference theme, ‘Renaissance’, a fitting anchor for the 2013 edition. After a period of negativity and dwelling on economic crisis in the region, the creative world is ready to respond with new ideas. The conference will bring in visionary speakers and trendsetters to present their take on the Renaissance of creativity.

The PromaxBDA Europe Conference programme offers two days of premium lectures and workshops. The conference provides an inspiring environment where creative leaders of the broadcast and the entertainment industry learn about the latest developments in technologies, trends and topics critical to their business. More sessions for PromaxBDA Europe 2013 will be announced shortly.

The 2013 PromaxBDA Europe Conference introduces a new track targeted for producers, writers, editors and PR-editors of all experience levels.

Jonathan Block Verk, President and CEO of PromaxBDA, said: “The Promo Boot Camp track gives us the opportunity to provide the fundamentals of creative promo making, alongside the inspiration, information and innovation that the conference is known for. It is equally a learning opportunity for those more green, and also a fantastic refresher course for those more seasoned. Expect the creative insights, latest tools and critical skills needed to be more effective and efficient in this uniquely creative industry.”

More information on speakers, sessions at the Promo Boot Camp specifically, will be made available shortly on promaxbda.org.

Honouring the very best in promotion, marketing and design, the conference culminates with the announcement of the PromaxBDA Europe Awards’ winners. The final deadline for awards entries is the 21st of December 2012. Please go to http://www.promaxbda.org/awards/current-awards/promaxbda-europe-awards-2013 for more information.