Prognostications, Previews and a Prediction for 2016 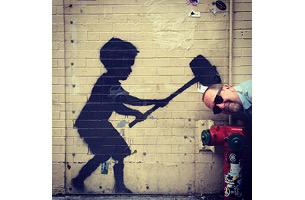 Those of us in advertising are often faced with the task of determining what is on the minds of consumers in order for us to be more effective at our jobs. Sometimes we rely on guesswork or gut instinct. Sometimes we take a more methodical approach by turning to research or some other time-tested technique. Anybody trying to predict the future faces a similarly challenging question – how can we know what will happen before it happens?

The answer can be summed up in two simple words: Focus Groups.

That’s right. If you want answers to the most pressing questions of our time (or the future), all you need to do is assemble a group of people from the appropriate demographic, keep them supplied with plenty of M&Ms and Diet Coke, and let them shower you with observations in excruciating detail.

To find out what will happen in 2016 we brought together a number of people who are unquestionably the most qualified to predict the future. Our Focus Group included the following:

After four days in a windowless room, our team of professional prognosticators emerged with the following prediction for 2016:

“A massive populist movement (fuelled in large part by social media) will force the United States Congress to turn the presidential election of 2016 into a weekly reality TV show. Every Tuesday night from August until November, viewers across the country will watch as the two main candidates try to match wits while undertaking a series of mock presidential tasks like declaring war, vetoing a bill and making their own sandwiches at 2am. Advertising slots on the weekly program will be sold on eBay.

By popular demand, news coverage of the campaign will not be permitted, political advertising will be confined to a single tweet from each candidate and political polls will be replaced by ‘likes’ on Facebook.

On election night, November 8th, 2016, the presidential candidates will face each other – literally. In an effort to return to a simpler time (and to show support for the second amendment), the candidates will engage in a duel using antique pistols while a record-breaking global audience of 7 billion people looks on. Advertising rates for that TV broadcast will eclipse those for Super Bowl XLIX and the season finale of The Voice.”

Blaine Lifton is CEO at Hyperbolous