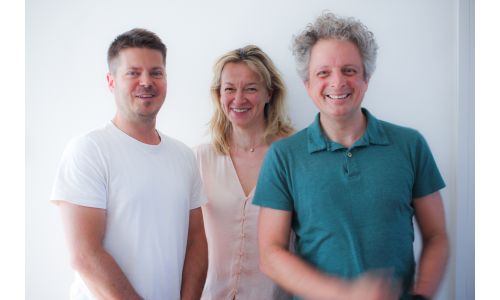 Squire is restructuring the traditional production company model by specialising in creating properties and owning rights. The company will also focus on identifying, exploiting and producing branded content opportunities within the intersection of advertising, broadcast and music.

With an eye on both domestic and international opportunities, Squire offers a 360-degree creative and production service by encompassing music, photography, documentary, design and TV departments. Squire will also white-label its offering to selective strategic partners.

In addition to launching with a director roster that features a BAFTA-winning team and an ICA/MoMA-exhibiting artist (see below), Squire’s three founders have outstanding industry credentials and complementary skills across the fields of music, advertising, factual television, entertainment, finance and rights exploitation.

JT is Managing Director. Before using his knack for combining creativity with a proven commercial aesthetic to develop branded content for the likes of Range Rover, Google, Next, Boots, Volvo and Absolut, JT was one of the UK’s most prolific music video directors, having helmed promos for everyone from Happy Mondays through to Leona Lewis.

Phil Tidy is Executive Producer. An early mid-90s pioneer of digital arts and multimedia, Phil is veteran producer with a keen interest in tech. He has worked with the biggest brands and bands in the world: Adidas to Oasis, Range Rover to Kylie, Hermes to Coldplay. In between producing Cannes Lions winning campaigns and short films, Phil finds time to co-curate the BUG Music Video Show at the BFI with comedian Adam Buxton and journalist David Knight. Phil is also a regular on industry judging panels like D&AD and the Webby Awards.

As Finance and Commercial Director, Clare Nicholls is responsible for working with creative teams to identify, develop and monetise a credible pipeline of fully exploitable formats and rights. A media investment banker, Clare previously co-founded indie TV company Splash Media with two senior BBC executives where she monetised the company’s IP across a full suite of media rights, helping Splash reach profitability within its first 12 months and growing turnover to £5m within two years.

JT, Squire’s MD, explained the launch’s rationale: “Although many conventional production companies offer additional content services, it’s very much done as a ‘bolt-on’. So we need a new breed of content studio that is truly platform agnostic; a production model with a genuinely fluid 360 approach. This is the only way to help brands truly identify, create, produce and monetise the increasingly dovetailed worlds of content, brands and broadcasters.”

Clare Nicholls, Squire’s Finance and Commercial Controller, added: “Demand for returnable, male-skewed factual entertainment features and formats is at an all time high, so creating a young, tech-savvy and commercially dynamic audience that is incredibly attractive to brands and their agencies. Meanwhile, controllers and commissioners want TV ideas that extend beyond linear viewing to create extensions with commercial opportunities for rights holders; an area we are apt to exploit through Squire’s cross section of expertise.”

Squire launches with a best in league director roster, featuring:

• Simon Henwood: In between exhibiting his paintings at MoMA and the ICA, Simon helms campaigns for Adidas, Reebok, Diesel and BT, as well as directing videos like Kanye West’s ‘Love Lockdown’ (Time Magazine's video of the year). He often acts as Creative Director on major album and tour campaigns, overseeing everything from packaging through to the album’s creative life in TV shows on behalf of Rihanna, Kanye and Alicia Keys.

• Spov: Directing campaigns for Activision, Electronic Arts, Sony, Ubisoft and Warner Brothers, Spov have been responsible for Call of Duty’s groundbreaking design and direction, plus the futuristic look of Titanfall and Watch_Dogs; two of 2014’s most eagerly awaited games.

• Jess Scott-Hunter: In addition to directing and writing comedy commercials for brands like KFC and PG Tips, Jess is a documentary craftsman who has created branded documentaries with Sony, Saab and Remington. Jess has just shot and is now posting two films for Grey London and Lucozade, featuring football legends.

• Mr Kaplin: This BAFTA-winning team has created live action and animated films for brands such as MTV, Chivas Regal, Intel and Samsung, as well as artists like Frank Eddie, Paris Wells and Toob.

• Trick has a raft of awards under his belt and is respected for a hard-boiled creativity that is highly original and arresting, but always relatable. He’s directed commercials for brands like Ford, NSPCC and Big Issue; those seeking to make a true splash.