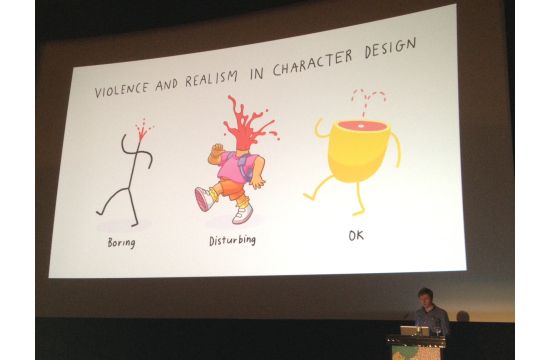 Passion, collaboration and keeping the balance between work and chill out time – if the first day of Ciclope festival was anything to go by, Machiavellian sharp elbows are most definitely out of fashion in the advertising production community. Or at least sheathed in soft, woollen cardigans and deployed only judiciously.

Wednesday saw the opening of the Ciclope: International Festival of Craft 2013 at Kino International in Berlin. Settling into its new European location – the festival has previously been hosted in Buenos Aires – Ciclope played host to a melange of people from the global and local production and advertising industries.

Kicking off proceedings was Massive Music’s Tommy Zee who’s philosophically-inclined talk ‘In Gut We Trust’ considered the ingredients of a great crafts person. It was a talk short on waffle but big on ideas and Zee’s theme of balance (create, consume and chill in equal measure) seemed to resonate with the audience. “Switch of Facebook, Twitter, Tumblr, Stumblr…RSS Feed. That word ‘feed… It sounds like something barn animals line up for,” said Zee as he urged listeners to be more selective in the culture they consume, in order to cultivate a more discerning gut instinct.

From the contemplative to the contemporary. The Advertising Producers Association took to the stage to share insights from this year’s trip to Silicon Valley. Jelly’s Chris Page, Vermillion’s Lee Kemp and Rattling Stuff’s Andy Orrick each gave a different perspective about the relevance of big data and big tech to production. Rattling Stuff’s Orrick stunned the crowd with a heartfelt first-person short story that covered everything from teenage viewing habits, Netflix and Internet privacy. It was an unusually literary moment that shook up the usual conference atmosphere – and if you do happen to make contact with Andy or Rattling Stuff, do try to read it.

Next up Glassworks talked the audience through a recent project for G-Star Raw, an unusual direct-with-client project that demonstrated how the role of post houses is evolving and moving up further up the creative process.

Rounding off the morning’s proceedings, DDB Chicago’s Director of Integrated Production Diane Jackson talked about the practicalities of this new collaborative age. Indeed, when budgets are squeezed and more people are fighting to get a bite of the pie ones competitors and collaborators  are often one and the same. “Collaboration isn’t about being best friends or even liking everyone you’re working with,” she said. “It’s about putting aside your baggage.”

Following a comprehensive and thought provoking discussion on Social film from B-Reel’s Jessica Valin and Cecilia Bernard and a comedic presentation from Sehsucht’s Mate Steinforth, things got down to the nitty gritty.

The day ended on a musical note, with Sizzer Amsterdam’s Riyadh Drebika leading a case study of a recent La Redoute project and a keynote speech by Julian Frost, director behind jaunty singalong awards behemoth Dumb Ways to Die. With appropriately deadpan delivery, Frost shone a new light on one of the most viewed pieces of content of the past year by sharing details of the creative process as well as the options and alternatives that didn’t make it into the final version of the spot – and even pre-vis stills from another animator who was considered for the project.

On a day in which the challenges and benefits of collaboration had emerged as the key themes, it was fitting to end on a project which has done so well thanks to the trust between agency, client and director.