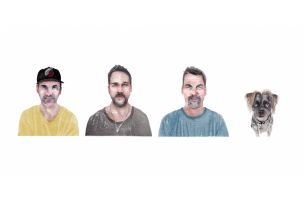 Aside from their extensive sports résumé, Matt and Mark Hoffman are equally acclaimed for directing irreverent comedy spots. Beyond the director’s chair, the real-life brothers are keen on parlaying their deep experience in developing concepts, writing and editing content for brands.

“We started this company with a collective purpose to make great work by aligning our creative vision and production resources to the fullest degree,” says Matt Hoffman. “To that end, we’ve deliberately shed the overhead of a physical office, so that all of our energy and resources go into pushing our work -- and ultimately, our client’s brand -- to the next level.”

“We’re ready to evolve and face new challenges as directors,” adds Mark Hoffman. “More importantly, if our clients understand that we have as much skin in the game as they do, then we’ll achieve creative success together.”

Fellow partner and executive producer Beveridge will lead the Hoffman Bros. on the other side of the business, including client relations, strategy, budgets and deadlines, among other creative tangibles.

“We’re set up to go the extra mile and take the type of creative risks that reward clients,” says Beveridge. “We’ve heard a lot of talk that modular production models are the wave of the future; meanwhile, we’re actually doing it. Our first two jobs with Nike are a testament to that approach. We’re laser-focused on serving our agency and brand partners. We’ll walk through every step of the strategy and the creative until we fully understand what they want -- and then we tailor our production accordingly.”

Mark Hoffman has a BS in Biology from the College of Wooster and studied film at the Institut For Mediagestaltung in Mainz, Germany. An award-winning editor and designer, he has worked with German TV / Arte, Imaginary Forces, and Motion Theory.

An avid writer, Matt Hoffman has a BA in Theater Performance and Art from Southern Oregon University. He has starred in a number of national commercials for Heineken, Bud Light, San Pellegrino, Honda, Volkswagen, Chevy, Home Depot, Target, Sprint, and Priceline.com, to name a few.

Both Hoffmans played collegiate soccer and are self-described “sports geeks.” Combining their creative and athletic inclinations, the brothers intuitively craft emotive sports content with an often-funny twist. They officially started working together in 2006 after teaming up on Nike’s “Joga Bonito” campaign for the 2006 World Cup, which Mark directed. Their “Jump Rope” film for Nike Surfing landed them an AICP Award and a place in MoMA’s permanent ad collection. Their “Today Was A Good Day” spot for Nike Skateboarding, featuring Paul Rodriguez, earned them Cannes Lion and Clio Awards.

The directing duo went on to helm projects for scores of different brands, including Subaru, John Deere, Verizon, Pepsi, Coppertone, Subway, Nivea, EA Sports, and ESPN. Before launching Hoffman Bros., they were repped stateside by Harvest Films and Community Films.

Partnering with clients, the Hoffman brothers can direct together or independently, approaching every collaboration in a way that supports their individual capabilities and, most importantly, the job.

“Our tone and creative drive are the same as they were when we were kids making silly movies with our dad’s video camera,” remarks Matt Hoffman. “To this day, we’re still challenging ourselves to raise our game and push the envelope creatively. John is the perfect partner to help us do that. He’s become our third brother.”

With nearly two decades of professional experience under his belt, Beveridge has worked in almost every capacity of digital content production as a line producer, agency producer, and post producer. His global list of clients includes Nike, Wieden + Kennedy, 72andSunny, DDB, BMW, Adidas, GSDM, BBDO, Subway, and many others.

“There’s a family feel that runs through our entire operation,” concludes Beveridge, who met the Hoffmans in 2012 while working on a Yurbuds spot. “Matt and Mark’s success is as much a demonstration of the value of nurturing lasting relationships in our industry as it is about doing great work. Clients like Nike, who we’ve worked with for a decade, know that we’ll deliver and pour everything we possibly can into the job. We deeply believe in our partnerships, from agency and brand clients to our crew, and that level of commitment, ultimately, comes through in our work.”

Hoffman Bros. is repped for commercials on the East Coast by Jolie Miller of Simpatico, in the Midwest by Renee & Melissa, and on the West Coast by Bryan Shrednick and Millie Munro of Bueno. The duo continues to be repped internationally by Independent Films in London.