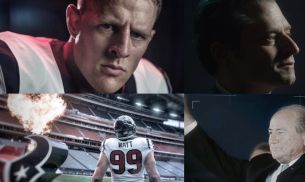 For the fifth time, the creative team at Evolve is recognised by the National Academy of Television Arts & Sciences with a National Emmy Award. Evolve contributed to ESPN E:60's Emmy win for Outstanding Sports Anthology, along with two other Emmy nominations in the Best Short Feature & Journalism categories.

“It’s been a true privilege and honour to work together with ESPN E:60,” reflects Evolve Founder / Director Joel Edwards. “We’re so grateful for the long standing relationship with E:60 in producing relevant content, that showcases some of the best stories in sports.”

“We’re so proud of this recognition for the past year with E:60,” Co-Founder / Director Jesse Edwards added. “The Evolve team has strived to continually raise the production value of our work and it’s great to be honoured for our contribution to ESPN’s programming.”