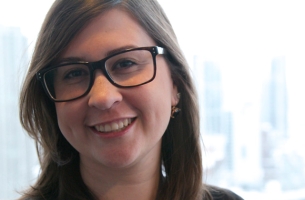 The leaders from global editorial company Cutters are very proud to announce the addition of Heather Richardson to their staff as a producer.  The appointment is effective immediately.

For the past nine years, Heather has been a producer for Cosmo Street Editorial in New York.  There, she produced high-profile commercial spots for the company's editors and many leading directors, including Joachim Back, Adam Berg, Bryan Buckley, Harold Einstein, Randy Krallman, Hank Perlman, The Perlorian Brothers, Steve Miller and David Shane, among many others.  Working with top-tier agency executives, some of her most recent projects were for AT&T, DirecTV, ESPN, Geico, GoDaddy, Land Rover, MasterCard, Mercedes, Samsung and Verizon.

Heather began with Cosmo Street in Los Angeles before moving to New York in 2008, and prior to that, she was a producer at the award-winning LA visual effects studio a52.  A graduate of the University of Colorado in Boulder, she grew up just north of Chicago, so landing at Cutters brings her home.

"I was drawn to Cutters because of the culture that has been cultivated and the family-feel that exists here," she said.  "I am super excited to work with the diverse and extremely talented editors on the Cutters roster."

"We feel very fortunate to have Heather as part of the Cutters team," added Cindy Duffy, director of post-production for Cutters. "It is so rare that you find someone with so much experience and the exact right skill set for the position you are looking to fill.  In addition to knowing the job so well, Heather has an incredibly positive, can-do attitude, but the thing I like most about her is the fact that she just gets it.  I am really looking forward to working with her."