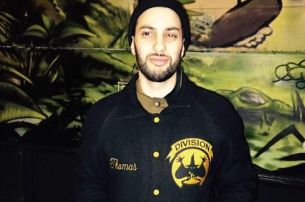 We are sad to announce that the French director Thomas Rhazi has passed away, as a result of his injuries suffered in a motorbike accident in Paris nearly three months ago.

Thomas Rhazi leaves a hugely impressive body of work as a music video director, his work displaying his distinctive talent for storytelling which combined a serious and often intense approach with an instinctive understanding of the power of visual effects. Having shot a Dandy Warhols promo in 2012 in the UK, his breakthrough work was the video for Goose's Your Ways, followed by Hawk House's Chill Pill - nominated at the UK Music Video Awards in 2014. He then directed the video for Alt-J's Pusher, followed by Baauer's Gogo, released at the end of 2015.

Growing up in Paris, Thomas's career began as a fashion photographer and a DoP prior to his transition to directing. He was also starting to gain accolades for his commercials at the time of his accident. This included his illuminating film Eyes Of A Child for the Noémi Association, which won two Wood Pencils at the 2015 D&ADs, and an Axe commercial starring model Shaun Ross, which he completed earlier this year.

Thomas signed to Division Paris in 2014, joining the company headed by his childhood friend Jules de Chateleux, and where another childhood friend Helmi was also represented. Since last year he has also been represented by Prettybird in London. His funeral takes place tomorrow, July 21st, in Paris.

Juliette Larthe, PRETTYBIRD, Co-Founder UK, Executive Producer, said in a statement: “The tragic loss of young director Thomas Rhazi this week, whom we represented with DIVISION Paris, has been a big shock for us, and one that we are struggling to come to terms with. As a mark of respect for Thomas Rhazi’s family and DIVISION, we will be shutting the PRETTYBIRD London office tomorrow, Thursday 21 July, the day of his funeral in Paris.

"Thomas was a hero and a legend, a very special man to me and our team, but our hearts are breaking for his family, his DIVISION PARIS family, and for his best friends Jules & Helmi.

"We are still reeling from the premature loss of such a young and promising talent, and our hearts are aching. Yet we hope that the love and talent he emitted in his short life, will endure inside all that knew him, and that his boundless energy will live on through those he touched, and in the films he made in his short yet prolific career.

"Thomas was a beautiful director, his work artful and abstract, yet using beautifully executed narratives. A whole story lived inside every piece. His oeuvre was poignant and touching, and he always managed to nurture great performances.

"Aged only 31 when he passed away, we have been robbed of an amazing film director before the world knew his name, we have lost an inspiring beautiful human being who enriched the lives of everyone he came near. He could focus on you during a conversation, listening and making you feel like you were imparting the most important words he would ever hear. This could be daunting, yet his humour and intelligence made you feel like it didn’t actually matter whether you thought it was important, he made you FEEL it was important...the most important thing in the world. He made such a very big impact. There was not enough time in his life, now cut short, for the entire world to enjoy how he expressed his vision.

"I know he would have been a household name; sadly we have all been left hanging with this vision. Thomas Rhazi was a phenomenal talent, and with heartfelt sadness we offer our condolences to those who helped make him as great as he was, and are great because of who he was, his family, his loves and his close friends. Thank you for giving us Thomas Rhazi."

For those unfamiliar with his work, 31-year-old Thomas Rhazi began his career as a fashion photographer and DoP, prior to his transition to directing. He was deeply passionate about music, and his work is coloured by a love of contemporary art and popular culture.

Thomas directed music videos for Baauer, Anton, Scratch Massive, The Dandy Warhols, Goose and Soko. In 2014, Thomas was nominated for Best Urban Video at the UKMVAs, for his work with London based hip-hop group, Hawk House. And again at the 2015 UKMVAs, where he was nominated in the Best Alternative Video UK category for Alt-J ‘Pusher’.

Thomas received two Wood Pencils at last year’s D&AD awards in Branded Film Content & Entertainment for ‘The Eyes of a Child’ - a campaign he directed on behalf of Leo Burnett. Most recently, Thomas directed the exhilarating music video for Baauer ‘GoGo!’ aswell as an AXE commercial with 72andsunny starring model Shaun Ross.