Directorial cousins talk NDS and Joel Compass ‘Back To Me’ 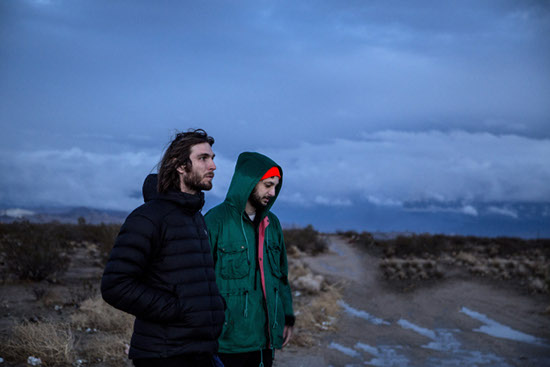 Ian & Cooper’s ‘Back To Me’ for Joel Compass has, deservedly, racked up a few awards in the past year. It has landed the Prettybird directing duo the Grand Jury Prize Music Video at SXSW 2014, Best International Video and Best Directorial Debut at MVPA 2013, Best Urban Video at the 2013 UKMVA, and most recently it was featured on the Saatchi & Saatchi New Directors’ Showcase. The family-tied duo told LBB’s Addison Capper how a first foray into cinemagraphs was worth it in the end.

LBB> How do you guys know each other?

LBB> Why do you think you work well as a duo?

I&C> We have a sort-of cousin mind meld. Although we have similar tastes, we're always pushing each other to think outside of the box. It can be a challenge sometimes to get on exactly the same page, but ultimately we think it makes our work stronger.

LBB> ‘Back to Me’ is really a series of ‘cinemagraphs’. Can you explain what they really are?

I&C> A cinemagraph is a blend of still image and cinema. Usually one subtle part of the frame is in motion, while everything else is still.

LBB> How did you end up using the technique for Back to Me?

I&C> Chris Marker's 1962 short film La Jetée was an initial inspiration. We liked the idea of telling a narrative, but constricting ourselves to a series of still frames. We wanted to bring something new to the table, though, and that's how we decided to use cinemagraphs. We'd seen some examples online, and felt it could work really well as a story and with Joel Compass's music.

LBB> And how are they to work with? Had you worked like that prior to Back to Me?

I&C> They were a challenge to work with, but it was a good challenge. We had to really think about how we could get across narrative and emotion in mostly still frames, come up with a ton of methods to incorporate ‘motion’ without being redundant, and make sure the film as a whole didn't feel gimmicky. We had never worked quite like that before.

LBB> What were the trickiest components of producing the film?

I&C> Since it was a very low budget project, we ended up having to do all the VFX on our own--and we both had zero experience with After Effects. So the first few days of post were spent furiously absorbing online tutorials and panicking about the schedule. Somehow it all came together on time though.

LBB> How did it feel to have it featured on the New Directors’ Showcase?

I&C> Very flattered. There are so many director geniuses who have been a part of the showcase in the past. It's been a surreal year for us with this film. We've gone to Poland with it for a cinematography festival, and SXSW in Austin. It's a cool feeling to have something we made resonate with people like this has.

LBB>  What does the rest of the year hold for you?

I&C> We're pitching on a few projects at the moment. We're excited to work more and continue experimenting and getting better as directors.

Little Black Book is proud media partner to the Saatchi & Saatchi New Directors' Showcase, which is set for global screenings.