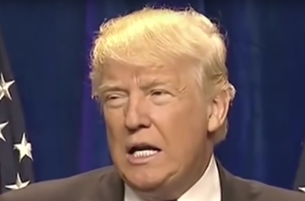 Mass shootings have become all too common in the United States (Mass Shooting Tracker: 371 recorded in 2015; 403 as of November 1st 2016).  In fact, during his tenure, President Barack Obama has formally addressed the nation on the subject of gun violence 25 times – on average every 112 days – and has repetitively made impassioned pleas for Congress to pass stricter laws.

In June 2016, just eight days after the 49 people lost their lives and another 53 were wounded in the deadliest mass shooting in U.S. history, President Obama once again implored lawmakers, and Congress, once again, blocked efforts to pass common-sense gun reform.

With the first major election about to take place since that tragic shooting, Action Against Gun Violence is urging Americans to vote for Senators who support common sense gun reform.  And using a unique approach to do so – "The Speech No One Wants To Hear.”

No matter who wins the election – Democratic nominee Hilary Clinton or Republican nominee, Donald Trump – at the current rate of mass shootings in the nation, it is almost a guarantee that the next President will need to hold a mass shooting speech within their first year in office.  The videos give a glimpse into what our next President could probably need to say if and when this tragic event occurs. The videos conclude with a call to action to voters in order to make an informed decision on November 8th.

Through these videos, Action Against Gun Violence puts a spotlight on the senators up for reelection who have voted against the most recent gun control proposals.  The video shows a map where we can locate the names of these senators who voted “no” in the June 2016 background checks proposals and are up for reelection.