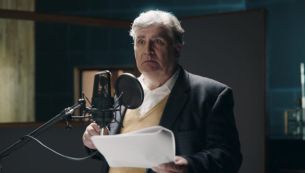 215 McCann has created “4 Changes Everything” for the latest campaign for the Forza Horizon franchise—the name gives a nod to the four seasons that unite all drivers inside the game’s new location in Great Britain.

To highlight the game’s stunning beauty and the wild freedom of an open-world racer, the spot is set in a recording studio, at a voice over recording session of what initially seems like an iconic British nature documentary. Legendary voice actor Maurice LaMarche narrates the film and takes us on a hilarious ride through each of the four seasons, while actor Joel Kelley Dauten plays his deadpan studio director counterpart.

Incredible gameplay graphics and breathtaking action take the story to new heights as a bevy of drivers race wherever they wish, in their dream cars, across the sprawling pastures of rural Great Britain. The host of video assets are optimized by online channel and the campaign is rounded out with digital display and custom media.

Forza Horizon 4 is the fourth title in the renowned open-world racing game franchise developed by Turn 10 and Playground Games for Xbox One and Windows 10 PC. It showcases game-changing features, such as Dynamic Seasons that change every week and an open-ended progression system.

The campaign will run in the U.S., U.K., Mexico, Germany, Australia, and France on paid online media in beginning September 6th. Forza Horizon 4 will be available on Xbox One and Windows 10 PC beginning October 2nd.