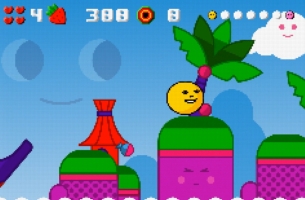 Having just finished a new lyric video for the Rolling Stones and currently working on a top secret project for a rock legend, Trunk were approached by Parlophone to work on the video for Blur’s new single. ‘Ong Ong’.

The penultimate track on Blur’s newest and critically acclaimed, Number 1 album The Magic Whip is “Ong Ong”, which has been given the Trunk treatment by directors Layla Atkinson and Pete Mellor.

Blur’s Creative Director Tony Hung’s concept of a classic arcade game video required the animatic to be pinned down as quickly as possible. Working with Tony, Trunk’s directors nailed it in just a couple of days, whilst a crack team of animators were lured into the studio, and 7 days later with only one killer all-nighter, the video was complete!

Influenced by the classic games such as Mario Bros, Donkey Kong and Pac-Man the video features the cute Mr OK, a bouncing ball which can be seen on the Ong Ong cover art, on a quest to be reunited with his girlfriend. In this wonderful traditional narrative, each level features a ‘Boss’ that our hero has to defeat. The riotous live-action sequence at the end of the video identifies each ‘Boss’, which were superbly characterised in digital form by Peepshow Collective’s very own Spencer Wilson. The gorgeous colourful palette used and playful nature of the video perfectly mirrors the fun and pop feel of the song.

Layla notes, “The song is full of fun and is very catchy which lent itself perfectly to Tony’s arcade game theme. As a big fan of the look from those early video games it was great to research them and to recreate classic 8 bit games such as Pong and Astro pinball”