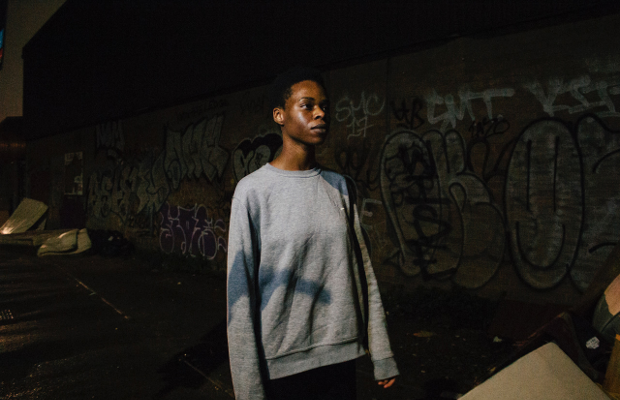 An emerging talent with something to say, Jasper Cable-Alexander’s new short film ‘Join Us’ asks big questions with hypnotising intensity.

Represented by Rankin’s The Graft, Jasper is an ambitious filmmaker and photographer whose modern style radiates through his every project. Join Us is an abstract narrative questioning the notions of community and identity. Framed as a visceral journey, it follows a lonely soul who stumbles into a place of worship and leaves as an empowered preacher. Brimming with emotion and open-ended questions, it juxtaposes the harshness of an urban setting with underlying mysticism and metaphor, for a visual which captivates beyond the final frame.
Watch the film first here and read Jasper’s interview with LBB’s Alex Reeves below.
LBB> Where did the idea for the film start for you?
Jasper> It started from living next door to one of the biggest religious buildings in London. Everyday on my way home, I was asked if I wanted to come in and learn about the benefits of joining the community. This is where my brain started ticking and I started to question the word community.
For me it initially meant to be part of something but as I started to research further into it, the word felt a lot bigger than that. I came across the Indian Guru Bhagwan Shree Rajneesh who started a large movement that practically created a wave in American history and almost became an entire city. He started this by creating a small community of followers who believed in his ideas so strongly they would practically do anything. This was so fascinating to me so I delved into the idea of what makes someone interested in joining a community and does it make them happier once they’ve joined.
LBB> Can you talk about your interest in cults and how it informed the film? Do you have a 'favourite' cult?
Jasper> I’m not sure if I have a favourite cult. It’s such a difficult question because there are so many different forms of cults.
LBB> What did you want to say about community and identity with the film?
Jasper> I was interested in the community within cults. It was fascinating to see that when people join together in a community it naturally draws others in too. Those who are lonely need family. For me, this can often become the people around you, and your community is formed.
LBB> What was it about Funmi Olagunju that made her perfect for this film?
Jasper> I met Funmi as I was still writing the idea for Join Us. I instantly saw her as the lead. I asked her if she’d ever done any acting and she said no which for me felt great because it meant that we could work together to create a raw character. We sat down for about two hours and spoke about her character and how she would play it out. She taught me more than I taught her about the character and by the end we felt like we knew the character pretty well.
It was important for the character to have two sides to her - before joining the cult and after. When we rehearsed I realised that her character was representing multiple sides and so we did a lot of movement work together to make a clear distinction that the character is changed after the experience that she goes through.
LBB> What's the girl with the sandwich there for? I'm pretty jealous of her contentment. The sandwich looks good!
Jasper> Haha. It was great fun shooting this part, I hope she liked the sandwich! These moments are supposed to represent exclusivity. When the young couple appears, Funmi’s character notices them straight away because they represent a love and affection that Funmi’s character doesn’t have, but wants. It's the same with the sandwich. The girl chomping on the sandwich is exclusive to the individual eating it and again Funmi’s character is excluded from this action.
LBB> Where did the music come from and what were your key decisions in that regard?
Jasper> The music is 50% of the whole film. I was listening to Tony Njoku’s music when I wrote this story, and so approaching him was a no brainer. The song encapsulates the story really well because of it’s interchanging rhythm. I really loved how the song carries us through something, with soft moments and really intense ones too.
LBB> Let's talk about the big moment of transformation, where she levitates. In some ways it feels familiar - is there anything you were referencing because I can't quite put my finger on what it reminded me of?
Jasper> The floating is the third stage of the main character’s transformation. I always imagined it as a force lifting her up, the point where she joins something meaningful to her. This is the turning point in the film, when she gets up she’s a different person in many ways.
LBB> Was that just done on wires and then cleaned up in post?
Jasper> We didn’t do it with wires, but I’d love to keep it as a mystery. It’s really special to us. Thank you to the guys at The Mill London for helping us achieve this magic trick!
LBB> How did you choose your location and how did that inform the film as it took shape?
Jasper> The locations came pretty naturally, the only thing I wanted specifically was that none of them were calling to a certain country or city. I can’t think of a time where we haven’t had cults or communities, it seems as though they will be forever standing and so the time in which the film is set is also non specific, it could happen in the present, in the past or in the future.
LBB> What was the biggest challenge of the whole project and how did you overcome it?
Jasper> The biggest challenge was staying awake for the night shoot! And waking up the next day to shoot more!
view more - Creative

Hair and Make Up: Alberte Kristensern