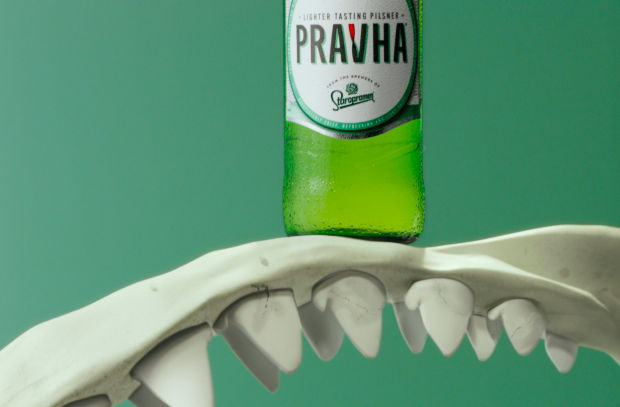 Premium world beer Pravha has unveiled its first national UK advertising campaign as it launches into the off-trade. The through-the-line campaign is the first for the brand from Molson Coors’ lead creative agency Havas London, and will target key cities including London, Birmingham, Manchester and Edinburgh.

Molson Coors’ multi-million investment into the brand, which includes a refreshed packaging design from BrandOpus, sees it launch nationally in major supermarkets and convenience stores following its success in the on-trade – which last year saw Pravha available in 3200 outlets around the country.

The beer, a 4% ABV pilsner from the brewers of Staropramen, has all the iconic bold flavours of a traditional, high-quality Czech pilsner but is unexpectedly crisp, light tasting and refreshing, and at a lower ABV. It is these characteristics that are reflected in the new campaign strapline, ‘A balance of bold flavour & light taste’.

This is brought to life through a series of visually arresting metaphors including a megaphone balanced on a bubble and a shark’s jaw balanced on a tulip. Reflecting Pravha’s premium positioning, each is shot in a still life photographic style against a simple duck egg backdrop, with the product proudly featured front and centre.

This marketing push and Pravha’s launch into the off-trade taps straight into the consumer trend for premiumisation. Within the premium beer category the largest value growth is being driven by world beers, which are up 15% and delivering £30 million year-on-year.

Jim Shearer, marketing director at Molson Coors says: “Despite being a relatively new brand to the market, Pravha is the fastest growing 4% ABV lager in the top 20 on-trade brands, proving to appeal to consumers looking for alternative options in the growing modern world beer space. Our ambition is to make Pravha the leading 4% world beer, and this distinctive, striking advertising campaign will be impossible to miss as Pravha rolls out into supermarkets and convenience stores up and down the country.”

Mark Whelan, chief creative officer at Havas UK adds: “We’re really lucky to have been able to work with the Pravha team to create a distinct brand world from scratch. We can’t wait to see it live in the world.”