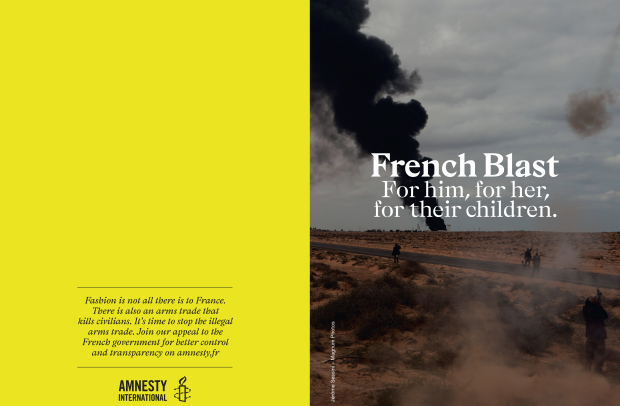 For several years, the French government has been promoting products made in France and sold abroad, as well as industries based in the country. When we think of French items traded in markets worldwide, the luxury sector comes to mind first. But fashion isn’t the only jewel in France’s global reach. There are weapons too. And while the framework they’re sold in is regulated, it’s actually only heeded very little.

Despite ratifying the international Arms Trade Treaty (ATT) in June 2014, the French government has continued to sell arms to countries that then use them against civilians. Which means France is conniving in war crimes.

To remind the government of its responsibilities and obligations, and to raise awareness among the general public, Amnesty International France is joining forces with DDB Paris to launch a communication campaign that decries the French government’s ploys and compares the fashion industry to the arms trade. The campaign is taking its cue from a petition demanding greater transparency from the government and concrete actions to better regulate its exports of military goods. It will be introduced in the form of poster displays from 23 September, just as the Paris Fashion Week kicks off. In this way, it’ll feature alongside French fashion’s big names.

The facts - from Amnesty International

As the world’s third-biggest arms-exporter, France should be respecting the ATT, which was signed and ratified in June 2014 to ban military goods from being transported when there’s a risk of international humanitarian law and human rights being seriously breached. But it turns out that the French government has carried on selling arms to several countries that then use them against civilians.

o Saudi Arabia and the United Arab Emirates are among France’s key clients, as are players in the Yemeni civil war, described by the UN as ‘the world’s worst humanitarian crisis’.

o Egypt - another country violating human rights among civilians - is also one of the French government’s loyal clients.

Contrary to France, several European states have, since 2017, stopped selling or transporting arms to nations that stand accused.

o Under pressure from public opinion, three countries—the Netherlands, Belgium (Flanders) and Greece—have reacted by partially or fully suspending their sale of arms to Saudi Arabia and the United Arab Emirates.

o Four other countries - Germany, Norway, Finland and Denmark - have announced they’ll be suspending their transport of arms to Saudi Arabia.

The French government is digging its heels in. It claims to abide by its undertakings even as investigations and revelations like that of ‘Disclose’ in 2019 prove, one after another, that the country is flouting the ATT.