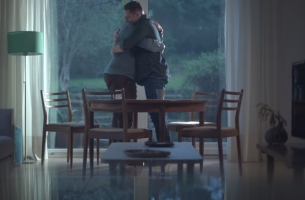 Today sees the launch of a new campaign for Fairy Non Bio. Created by Leo Burnett London and Holler, the campaign features a two-minute online film that focuses on the power of a hug between a father and son, launching ahead of Father’s Day (June 21st)

The film ‘Learning to Hug’ tells a powerful and emotional story about a subject that many of us recognise but rarely talk about.

From the moment they’re born, we hug our babies constantly, because we know instinctively the power those hugs have. They make us feel safe, nurtured, connected and loved. But as our babies grow up, we embrace them less and less. So, if we know how powerful hugs are, why does this happen - and can we do anything about it?

In the film, we experience the real-life story of father, Stephen and his son Ben (the real Stephen and Ben feature in the film), from those first tender moments together through to the present day.

From those close, formative years to the distance that grew between them, we learn why the hugging stopped and watch as they rediscover how soft hugs can be an incredibly powerful force.

Through this new film, Fairy Non Bio celebrates its brand idea of ‘The Power of Soft’, and champions the idea that we should #NeverStopHugging our babies – no matter how old they are.