Post Production and VFX in the Summer of Sport

Trends and Insight 841 Add to collection

LBB's Jake Otley delves into the tips, tricks and technical kit post production and VFX professionals will be using in this year’s summer of sport 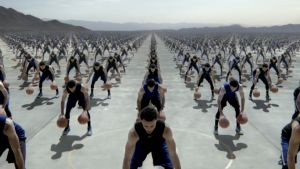 For brands and advertisers, sporting events are massive draws. Just look at the Super Bowl. The annual American football extravaganza draws in over 100 million viewers every year, and the cost of a measly 30-second spot averaged out at $4.5 million in 2016. But long after this year’s rather tedious match came to an end – the Denver Broncos won at a canter against the Carolina Panthers – people around the globe were still debating which ads stole the show.

Right now, the industry is bracing itself for a fabled ‘Summer of Sport’, with the European Championships kicking off for football fans and, of course, the Olympic Games in Rio de Janeiro.

While the sporting events themselves attract packed stadiums and electric atmospheres, much of the hype and momentum is built before the whistle blows. Surrounding any major sporting event, or when reimagining it for the big screen, post production teams have to recreate the electric energy that allows audiences at home to feel part of the action.

So, with another huge summer of sport fast-approaching, how will the post production wizards conjure up a photorealistic universe where stadiums, crowds and sport superstars spring to life at the touch of a button?

Understand your sport
The first stage of any successful project. Sport is sometimes downplayed as a trivial pursuit enjoyed by the masses, but one with no real complexity. In reality, sport can be incredibly nuanced, and understanding the quirks and complexities are just as important as knowing about the standard conventions – so do your research!
In the film Southpaw, Jake Gyllenhaal’s character battered and bruised by both his boxing profession and his personal life. The VFX team at ZERO were tasked with creating intense brutality, a photorealistic Madison Square Garden from thin air, and all the trappings of a real-life boxing bout in post production. But, as VFX Supervisor Dan Cayer explains, the first stage is always research: “We began by looking at real fights for clues. Boxing footage isn't very difficult to find online as there are so many events each year, and most of them are covered for television or PPV, so finding footage can often be just a search engine away.”
Beyond researching the sport itself, VFX specialists must also understand the surroundings and the stadiums where the sport comes to life. Dan continues: “We looked at the lights and dressing around the ring, the jumbotron, the way the stadium seating is built, the luxury boxes, and on and on. Beyond the structure itself, we'll study how the cameras are usually staged for a fight, what type of motion they have, or if they are locked off. As we find out more about a project, we then have a good base knowledge we can begin to fine tune. But the initial research is essential to any VFX job, especially those in the world of sport.”

Once you have your sport – be it boxing, football, rugby or tennis – you need a venue. Luckily, technology has come such a long way that entire stadiums can be built from the ground up. The masters of this God-like stadium creation is a topic of debate, but The Mill has certainly been one post house that has led the way in innovation.

Rob Holmes, Head of 3D at The Mill, describes how they have created software that has taken the pain out of bespoke stadium creation: “The Mill Stadium Toolkit is the first stadium toolkit of its kind. It’s a complete framework for creating bespoke photoreal stadiums from scratch in the most efficient way possible.”

Once again, hours and hours of intense research drove the success of the software. Rob continues, “It works because some very clever artists have analysed hundreds of stadiums, distilled the defining features and then created an environment, which can be refined to create the perfect stadium for any brand or project.”

The days of tedious, fiddly work on stadiums could soon be over. Brands and sports advertisers can call on The Mill Stadium Toolkit to create beautifully tailored stadiums at super speed.

Rob concludes, “Our toolkit will help us respond to the needs of leading sports advertisers in this year’s busy summer of sport, enabling us to keep up with the pace and scale of the events taking place.”

Once you’ve created a stadium, you need fans to fill it. The Mill has this covered too as their toolkit’s crowd generation extends down to the smallest detail: flags, lights, hot dog stands, and even the litter on the floor. But the post trickery doesn’t stop there.

Colourists have an essential role to play in any post production job. They are the fine-tuners and beautifiers who take a plain drab film and bring it to life. In this summer of sport, colourists will be using crowds, both live action and computer generated, to their advantage.

Kenny Gibb, colourist working with Fifty Fifty Post Production explains: “For colourists, the balance between separation and prominence is key to the story you are trying to tell. In one scene you may want the heroes on the pitch to be the focus for the viewer, meaning you dial down the colours in the crowd which draws more focus onto the stars on the pitch. In another scene, however, you may want to highlight the jubilation in the crowd rather than the action on the pitch, so you focus on creating prominent colours within the crowd scene. In the grade a colourist can really dictate where the viewer is looking, and this is clearly of paramount importance to the overall narrative.”

In many crowd scenes, the colourist has to walk a tightrope of continuity. Ben Rogers, Head of Colour at Gramercy Park Studios, explains: “When it comes to crowds, part of the job is to integrate what has been composited. This has to be done carefully as you don’t want to affect the look that has been decided on. You also don’t want to affect the action of the athletes’ shot-by shot, and this has to be executed considering the continuity of the whole commercial.”

Lewis Crossfield, colourist at Electric Theatre Collective, explains how the colourists and the VFX team work in harmony: “When I grade big sporting commercials, I focus primarily on the overall grade. Usually with these big projects, I'll be working on plates of empty stadiums, or in some cases, pitches with no stadiums at all. That's where the incredible VFX team comes in and fills the empty stadium or builds something that was never there, but looks as if it always has been. I rarely have to worry as the VFX artists light the stadium and bed it in perfectly to the grade I've set. Other times we have to work with live crowds shot in a stadium. In my experience, these shots are usually taken with the star in mind so operators use a shallower depth of field, drawing your focus to the players. You also get the standard high angle shots of a pitch or court that stops the players blending in with a background of supports wearing the same shirt as them.”

Time with the stars

With your stadium built and your fans inside, the main attraction needs to arrive: the sporting superstars. But getting them in a room for more than 15 minutes can prove challenging, so the post pros have to get experimental.

Simon Bell at Just So, explains how Just So Films converted a few hours with LeBron James into a visually impressive spot detailing his ‘Defining Moment’ - a high school basketball final. “When working with superstar athletes, time is precious. Their schedules tend to be so busy that you have to get creative. In our ‘Defining Moments’ series for Audemars Piguet, we used archive material from LeBron's high school basketball days and interspersed it with film we shot with Lebron on-set. With some collage editing, grading trickery and hunting out the right archive material to tell the story, we were able to create a series of stunning short films despite having limited time with each star.”

Aron Hjartarason, Executive Creative Director at Framestore LA, also points to time as a primary issue: “Out of the myriad challenges, time constraints would probably have most weight. Access to superstars is tightly rationed on shoot and therefore everything you do needs to cater to that. Be fast, accurate and thorough when you are capturing reference data on-set, however you do it.”

In terms of the data collection, Aron continues: “Getting accurate reference data is very important. A lot of these individuals do not conform to ‘average’ human proportions…Know your measuring hardware inside out. You don’t want to be the failure point in a complex production day. So have a plan B. And a plan C. And have them all sound like plan A when executed.”

Sometimes it can be difficult to remember that Becks, LeBron and Rory Mcilroy are only real people. But when it comes to advertising they are always selling something. “The stars are the product,” says Lewis Crossfield. A sentiment shared by Kenny Giib: “There’s always a brief, of course. And when you’re dealing with a mega star of sport, their look will have been agreed across platforms to conform with their brand identity. It’s down to the colourist to continue this look.”

The fast-paced, high-octane spirit of sport can be presented best in the edit suite. Fast cuts are a staple of sport montages, commercials and films. But how can editors master the pace of sport without overwhelming the viewer? Nick Armstrong, an award-winning editor at Cut + Run, comments: “The speed of a sporting edit can obviously be fast-paced as a dynamic cut can mirror the energy of the sport. That can also mean knowing when to slow things down. The moments that breath can increase the perception of pace within a fast cut. Remember, the light can be as important as the shade.”

Even at the final stage, research is critical, as Nick continues: “An extra appreciation of the sport is key. To be able to understand what generic conventions, audience preconceptions of certain aspects of the sport and who the players are is invaluable as a communication tool.”

From beginning to end, a thorough knowledge of the ins and outs of your sport is an invaluable tool when approaching post production. So, with the Euros, Olympics, Paralympics, Wimbledon and a smorgasbord of other sport on offer this summer, the post production pros better get the tele on!