Post Office to Serenade Mums on Mother's Day via Vine 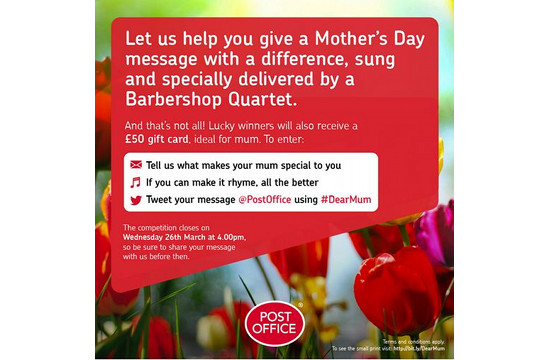 Mindshare UK and the Post Office have teamed up to offer 15 lucky people the chance to serenade their mum with a Barber Shop Quartet delivered by ‘special delivery’ on Vine.  The competition will run on Twitter on the 25th and 26th March and will also give people a chance to win £50 vouchers for their Mum.

The winning 15 entries will be selected by The Post Office and turned into video messages that will be sung by the Barbershop Quartet who have previously appeared on BBC Three and Capital Radio. The 6 second long films will be uploaded onto Vine where winners can then share the video URL with their Mums or show them the films in time for Mother’s Day.

The competition will launch for entries from Tuesday 25 March and continue on Wednesday 26 March, when the Mindshare team will also be filming the Vines live at Post Office Headquarters in London.  Winning entries will be selected throughout the day and winners will be tweeted with their personalised Vines.

The Vines will be available to view on the Post Office Vine page from the 26th March and will be live tweeted on the Post Office Twitter account throughout the day. The activity will be supported by a Promoted Tweets campaign to drive engagement.

Elisabeth Edvardsen, Account Manager at Mindshare said, “This campaign is a great example of us being truly adaptive in our marketing and media. The Post Office has been a great client to work with that has been really keen to react to events and work in real time to deliver personalised content.”