Post Malone Highlights What Drives his Creativity with Dolby Atmos 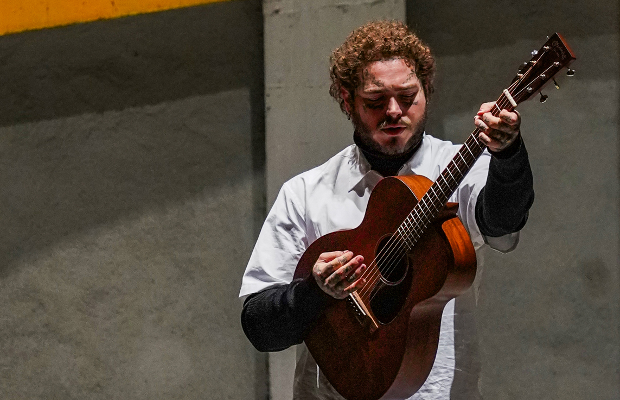 Dolby Laboratories, Inc., a leader in immersive entertainment experiences, is unveiling the third short film of its Dolby Atmos Music campaign from 72andSunny, featuring global superstar, Post Malone, one of 2019’s most streamed artists.
“For the next stop on our journey to redefine music, we take a ride with Post Malone to share his creative process and reaction to experiencing his own music in Dolby Atmos for the first time,” said Todd Pendleton, senior vice president and chief marketing officer, Dolby Laboratories. “Post said it best, ‘I’ve never heard music like this.’”
Spotlighting his latest hit ‘Circles’, which has been one of the top songs on Billboard’s Hot 100 Chart, the film explores Post Malone’s desire to connect with people through music and the journey behind his rise to success – from playing shows at SXSW with only a few people in the audience to performing at sold out stadiums across the world. Post Malone also shares how Dolby Atmos captured his emotions in a way that he has never felt before and how this platform will change how music is created and experienced. Fans can hear his latest hit, Circles, today in Dolby Atmos on Echo Studio through Amazon Music HD.
“Listening in Dolby Atmos blew my mind. It is the coolest thing that’s happened to me in a long time,” said Post Malone. “Stereo’s been around forever, and this is something completely different. It’s going to arm artists with a new way to get their ideas out. I’ve never heard anything like it.”
The series has given millions of people around the world an intimate look into the creative minds of today’s top artists to showcase their personal ethos, stories, and close relationship with fans. Dolby joined forces with these trailblazers in music because they inspire others by living unapologetically, and their art is leading culture. The campaign features real stories from each artist and highlights their latest singles. It’s based on the insight that people want to feel a deeper connection with their favourite artists through music, the kind a Dolby Atmos Music experience can authentically deliver.
The films were directed by the award-winning Toronto based director Karena Evans at m ss ng p eces. She is one of entertainment’s most sought-after talents and is known for her cinematic, authentic, and narrative-focused directorial style. Karena is behind Drake’s 2018 music video, God’s Plan, and is revered for telling diverse, inclusive stories about the human condition.
“The genesis of this campaign is inspired by Dolby’s mission itself – a pure transmission of artist intention,” said Karena Evans. “We decided to approach this campaign unconventionally through interior monologues to explore the purity of thought and creativity. At its core, this is what Dolby Atmos is.”
view more - Creative