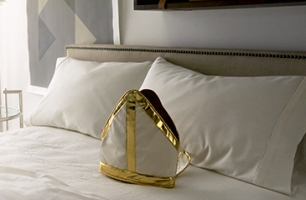 As Pope Francis’ USA visit nears and millions anticipate His Holiness’ arrival, papal representatives are doing all they can to ensure a restful stay, including providing the Pope with a Loom & Leaf eco-luxury memory foam mattress, from online mattress company Saatva. News of the order broke just as ad agency Free Enterprise was in the midst of a commercial shoot for Saatva. It was one of those rare creative opportunities the agency did not have to sleep on, to act upon.

Blaine Lifton, CEO & Founder, Free Enterprise, commented, “Since we were actually shooting bedroom interiors for Saatva at the time, it did not take long for us to realize we could capitalize on the news about the Pope’s visit and the Saatva mattress he would be sleeping on. We knew it would be ideal for social media. If only we had something we could place in one of our settings that would indicate the Pope was ‘in residence’…”

Spontaneously the idea took wings, so to speak. If the agency could place the Pope’s hat (or more accurately, miter), on the nightstand next to a Saatva bed, this would convey the message, without compromising the integrity of His Holiness or his position. Free Enterprise chose a most ‘humble’ bedroom setting to reflect the Pope’s approach to his job. One key last piece remained: where to find the miter? The agency immediately dispatched their essential, energetic intern, Tessa Donolli, to find the missing headdress. Tessa managed to find, according to multiple retail sources, “the last remaining Pope’s hat in New York City”, at Abracadabra costume shop in Chelsea. The set complete, Free Enterprise captured video and numerous photos shot on an iPhone 6 -- a nod to another great ad campaign -- conveying the pure, simple creative idea. 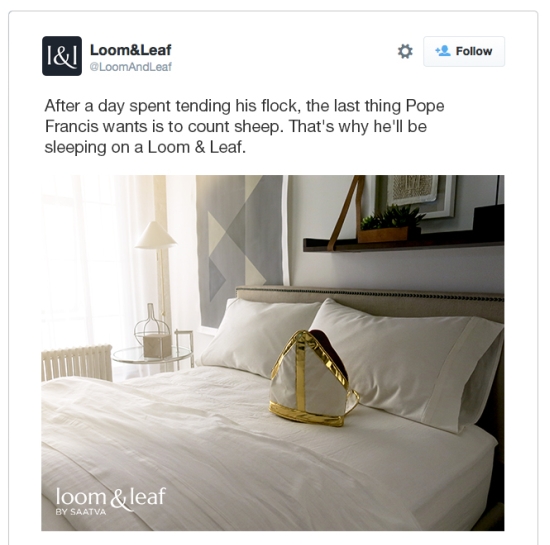 Lifton continued, “The result is perfect. We did not use the Pope’s likeness or show him sleeping, but we simply took full advantage of a rare opportunity. The photo will be a star for Saatva on social media, along with welcoming the Pope to America and wishing him a restful visit.”

Ron Rudzin, CEO, Saatva Mattress, concluded, “We are humbled and honored to be called to serve the Pope by providing him with healthy comfort so he will be well rested and ready to greet the millions of his followers. The luxury mattress he will sleep on is fit for a king, and for the everyday person too, a perfect choice for His Holiness.” Some fun facts about the Pontiff’s sleep habits: the Pope is reported to go to bed at 9:00pm and never watches TV, instead prefers to read for an hour before he calls it a night at 10:00pm; the Pope normally sleeps for six hours and wakes at 4:00am, without an alarm; the Pope often naps for 40 minutes to an hour during the day.