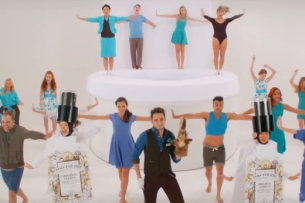 After its wildly successful Poo-inspired videos in 2013 and 2014, Poo~Pourri is launching a new video boasting all the uncomfortable places you can go now with Poo~Pourri. The video is directed by the critically acclaimed Cameron Duddy, who recently directed Mark Ronson and Bruno Mars' Uptown Funk music video.  Poo~Pourri, the award winning before-you-go toilet spray that is proven to stop toilet odors before they begin, also teamed up with Choreographer Sara Von Gillern from MTV's all-star season of America's Best Dance Crew and Voice contestant Jeff Lewis.

The video features dancers in different scenarios where going poo may be awkward, such as at the office. The dancers exude confidence as they own their poo and are able to freely go wherever the wind takes them. The video demonstrates the relief that comes when potty embarrassment has been eliminated.

“There is stress associated with going number two and leaving a smell behind, especially in a shared bathroom,” says Suzy Bátiz, CEO and Founder of Poo~Pourri.  “Whether you are at the workplace or at your significant other’s house for the first time, you can break free of the shame with Poo~Pourri, and free up mental energy to do something positive in this world.”

VP of Marketing: Will Clarke