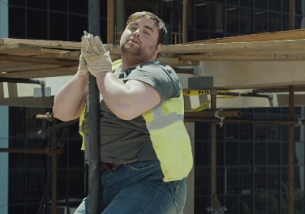 After the overwhelming success of Dave’s Epic Strut where the nation took his booty shaking moves into their hearts, the hot pants and heels have been put to rest for now, paving the way for a new man in town in the latest iteration of the ‘You’re So MoneySuperMarket’ campaign.

Introducing Colin, who like others before him, has saved money at MoneySuperMarket and now he feels EPIC. Working on a typical high rise construction site in the city, Colin throws his hard hat into the wind as he psyches himself up to celebrate the savings he has made. The early noughties classic “Just A Little Bit” by Liberty X kicks in as Colin jumps on to a construction pole with ease and starts to show off some serious moves.

A fellow builder drops his hard-hat on the floor in amazement as Colin continues to show off his epic ability. It’s not just the workmen that look on in shock, Colin has also caught the eye of office workers in the skyscraper opposite who all gather at a window in disbelief.

For his grand finale, Colin performs an impressive worm before taking to the pole again to break into the splits – a difficult feat for most, especially your everyday builder. Finally a voiceover declares: “Colin, you’re so MoneySuperMarket” before one final shot of Colin paying homage to Miley Cyrus by swinging from his wrecking ball.

The 30 second ad will debut on Saturday 25th July with a key spot during Despicable Me on ITV1 at 19.50pm and will receive additional marketing support with activity planned across PR, social media and digital channels, using the hashtag #EpicBuilder.

Miranda Roe, Brand Marketing Director at MoneySuperMarket, said: “Even though we are in a period of deflation, with the cost of living decreasing over the year, many UK households are still not seeing the benefits of this in their wallets. That’s why MoneySuperMarket continues to celebrate the epic feeling of saving money by taking the “You’re So MoneySuperMarket” campaign up a gear with our new man, Colin. It continues the light-hearted element of previous MoneySuperMarket campaigns whilst continuing our key aim in encouraging the nation’s households to put the power into their hands and save on their everyday bills.”

Lisa Turner-Wray and Raine Allen-Miller, from Mother London said: “British builder Colin saved money at MoneySuperMarket and now he feels…EPIC. He may not have the ab definition of Channing Tatum but boy can he move. Colin uses the site scaffolding to release his inner pole dancer. Perfectly executing a series of moves including the Box Splits, Spinning Straddle and the Nose Breaker Drop. This builder has got attitude and plenty of it. Colin’s performance is executed with super sass to 'Just A Little' by Liberty X. Move aside Magic Mike, Curvaceous Colin is in town.”