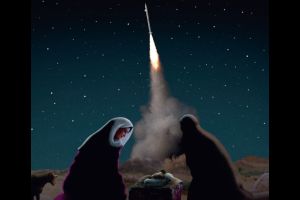 The cards, with names including ‘Not So Silent Night’ and ‘The Star of Bedlam’, were designed by McCann London and feature photojournalism from Press Association taken over the last year. Rather than making a religious statement, these images seek to remind the public that this year war has forced millions from their homes, and they really need our help.

Leigh Daynes, the charity’s Executive Director, said: “Every Christmas a romanticised picture is presented of the holy land of the past, featuring peaceful pastoral images that are shared in homes, churches and high streets across the country. This is completely at odds with the humanitarian crisis that the region faces today. This Christmas we’re asking people to see the realities that we see of the war-torn Middle East, and share some goodwill with a donation to help us give medical aid to people in desperate need.”

He added: “Those of all faiths and of none have been forced from their homes, lost their livelihoods and are now homeless; countless children have been robbed of their childhoods.”

Conflict in the Middle East has led to the biggest forced displacement of civilians since the Second World War.  The United Nations estimates that 65million people have fled their homes because of violence and armed conflict; half are from just three countries: Syria, Afghanistan and Somalia; some 28million are children.  Although the number of refugees fleeing to Europe this year has dropped sharply, the likelihood of dying whilst crossing the Mediterranean has spiralled to one in 88.  Between Libya and Italy the likelihood of dying at sea is even higher, at one death in every 47 arrivals.

Mike Oughton, Creative Director at McCann London said: “We saw a huge irony in the war-torn imagery of the Middle East today, when compared to the imagery of the nativity, and its message of ‘peace on earth’ and ‘goodwill to all men’. By creating a set of Christmas cards that seamlessly merge the past with the stark realities of the present, we hope to prick people’s consciences. So, at this time of giving, they are inspired to support the amazing humanitarian work of Doctors of the World.”

“Instead of sending shop-bought cards this year I’m asking everyone I know to buy and send these unique cards,” added TV presenter and Doctors of the World Trustee Dr Chris van Tulleken, who presents the BAFTA winning CBBC programme ‘Operation Ouch’ with his twin brother Xand.

A pack of four limited edition cards, each of a different design, can be purchased for £10 from Doctors of the World at its website: www.doctorsoftheworld.org.uk or by calling 020 7167 5789.

Proceeds from the sale of each pack will help the organisation provide vital medical aid to people who’ve been forced from their homes by war.  And help to re-instate a little of the most festive feeling of all – Hope.